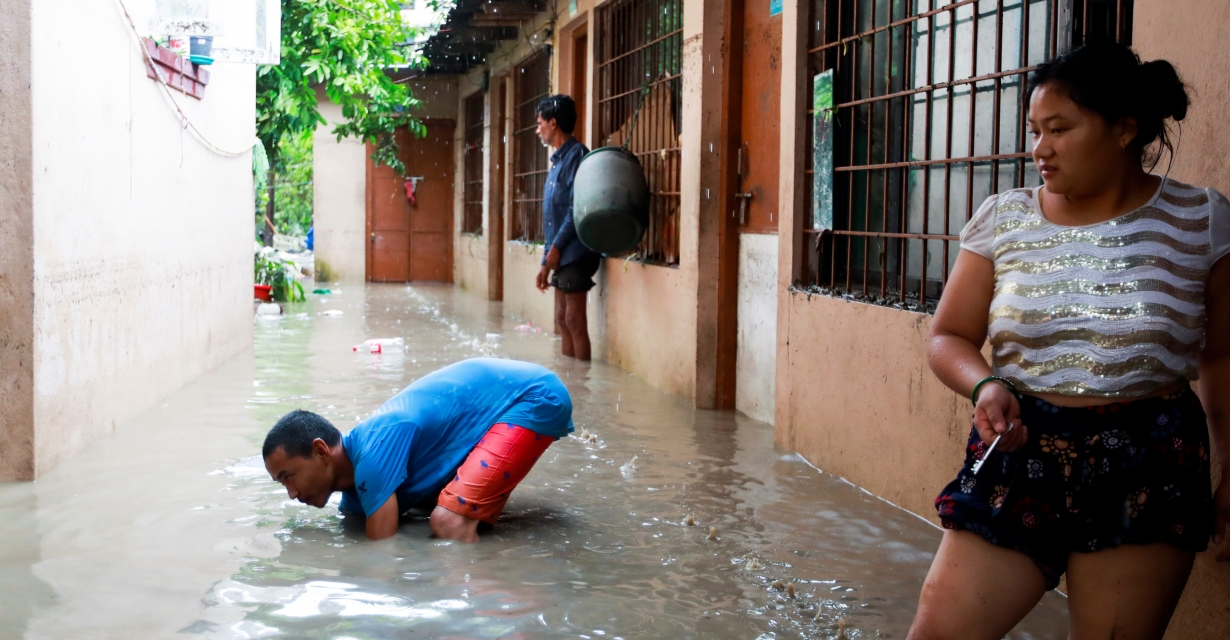 When Sita Poddar wants some water, she walks from her home in Nepal’s Kathmandu Valley to a neighbouring town 15 minutes away, where she waits at the public tap in the yard of a temple.

She is usually in line for an hour before she can fill three 20-litre cans with brown, murky water – if she gets any at all. The tap runs for only two hours every five days.

“Sometimes I return empty-handed, because water doesn’t come through the tap or it stops coming out even before my turn comes,” said Poddar who lives in Taumadhi, a densely populated town in Bhaktapur district, southeast of Kathmandu.

“Even in the monsoon, I am struggling to quench my thirst.”

But two kilometres away, the residents of the town of Liwali enjoy clean water year-round, thanks to a rooftop rainwater-harvesting plant built in a disused earthquake camp.

For the past four years, Liwali residents have been collecting rainwater through a system of pipes connected to the zinc sheet roofs of shacks built as temporary housing after two huge earthquakes shook Nepal in 2015, explained resident Kamala Sitikhu.

The water is stored in a 106,000-litre underground tank, filtered and dispensed through a set of taps, and evenly shared among nearly 100 households, each of whom get 40 litres every other day, she said.

“Our situation was no different than Taumadhi’s. (But) now, we don’t have to go to a neighbouring town to get water,” Sitikhu said, lifting a water-filled can to her waist.

Rainwater harvesting projects like the one in Liwali could offer a solution to other thirsty towns, water experts say, as scientists warn a hotter climate will lead to more intense water shortages.

There are no recent figures on changes in groundwater levels in Bhaktapur.

But water experts say they are perilously low, largely due to overuse by local people, industries and the region’s water supplier, Kathmandu Upatyaka Khanepani Limited (KUKL), said Sangam Shrestha, a professor of water engineering and management at the Asian Institute of Technology in Thailand.

Rising temperatures driven by climate change are expected to exacerbate the problem, added Shrestha, whose research predicts that the average maximum temperature in Kathmandu Valley could rise by up to 3.8 degrees Celsius (6.84 Fahrenheit) by the end of this century.

Higher temperatures will affect water demand and how groundwater is recharged by rain, which means “the water shortage in Bhaktapur will get worse,” he warned.

In 2017, when Liwali started harvesting rainwater, Nepal had about 7,170 cubic metres of renewable fresh water per person, down from 8,770 cubic metres a decade earlier, according to the World Bank.

Studies show the population in the Kathmandu Valley – home to more than 2.5 million people – is increasing at a rate of 6.5% per year, making it one of the fastest-growing metropolitan areas in South Asia.

With a booming population, an insufficient and leaky water network and rising temperatures all putting pressure on water supplies, KUKL said in its annual report last year that it is meeting less than 20% of the region’s water demand.

“Since all our other sources of water don’t work, we can depend on rainwater,” said Narayan Khaitu, president of the Liwali Ganesh Drinking Water Distribution Committee, which oversees the system’s upkeep and decides how the water is distributed.

Liwali residents began building their rainwater harvesting plant based on advice from local charity Guthi, which focuses on water and sanitation.

Liwali residents say the water has to be rationed in the dry season – mainly from February to April – but comfortably meets their needs the rest of the year.

While the water from the plant is free, each user donates 100 rupees ($1) per month to cover the cost of electricity to run the filter pump.

That is far less than what many would pay to buy water from private vendors, who usually charge about 40 rupees for 20 litres, noted Prakash Amatya, a technical advisor at Guthi.

Inspired by the Liwali plant, communities in nearby water-stressed towns have now built their own systems and officials from Bhaktapur Municipality and Kathmandu city have visited to see if they can duplicate the system, Amatya said.

“Rainwater harvesting could be replicated and promoted in many locations,” he said, noting he has a system installed at his home and has not paid for water in over a decade.

As water shortages intensify around Nepal, a range of efforts to harvest rainwater are gaining traction.

In the country’s southeast, the sub-metropolitan city of Dharan offers a 40% rebate on construction permit fees to anyone who installs a water collection pit while building a house, to help replenish groundwater, said Khagendra Prasad Khatiwada, an information officer for Dharan.

And the midwestern city of Pokhara is paying farmers to construct plastic-lined ponds to catch monsoon run-off and save it for irrigation during dry periods, said Manohar Kadariya, head of the city’s agriculture department.

“Farmers are able to produce off-season vegetables since the retention ponds enable irrigation even in the dry season,” Kadariya said, noting that the city provides about 300,000 rupees ($2,500) toward each pond constructed.

He said water extraction must become more sustainable and the government should focus on implementing rainwater harvesting initiatives across the country.

“Continuous depletion of the water table is accelerating the water crisis,” Upadhya said.

“And rainwater harvesting certainly helps, but it has to be a well-organised nationwide campaign to eke out better results.” (REUTERS)