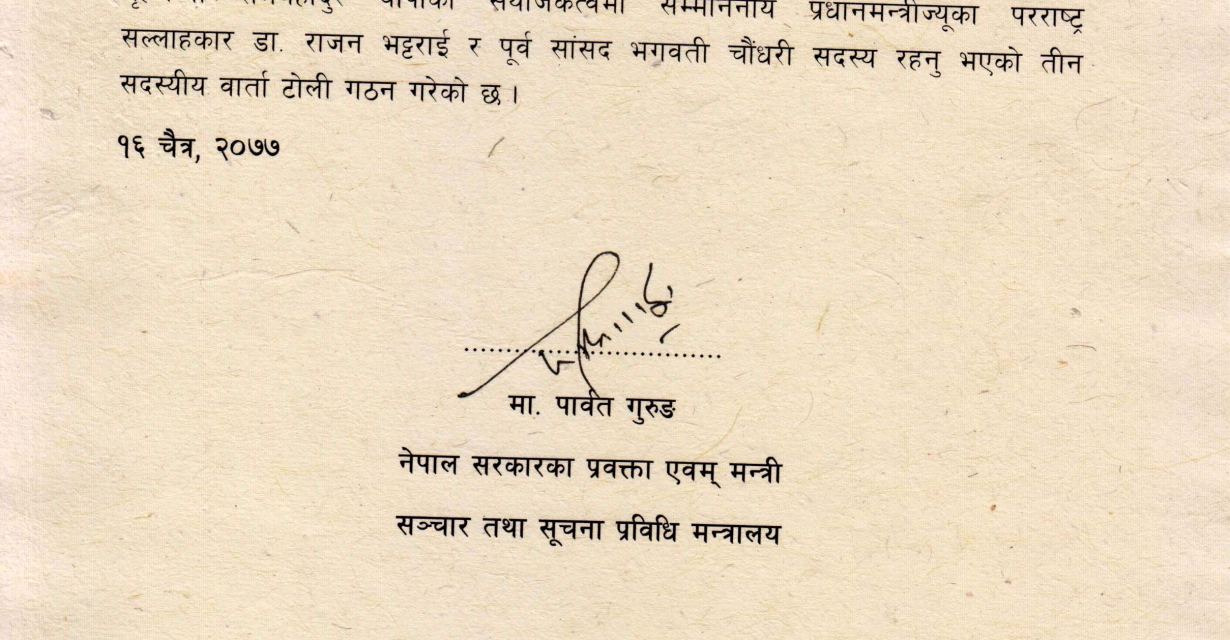 The government has formed a three-member team to hold dialogue with the agitating Tharuhat-Tharuwan United Struggle Committee and other groups that have been demanding the release of lawmaker Resham Chaudhary.

As per a notice issued by the Ministry of Communication and Information Technology, the three-member team led by the Minister for Home Affairs, Ram Bahadur Thapa would begin holding dialogue with the agitating groups Monday onwards.

Tharu Kalyankarini Sabha, Tharuwan-Tharuhat United Struggle Committee and Central Movement Operation Committee have been staging a sit-in at Maitighar of Kathmandu with a 19-point demand, including the release of lawmaker Chaudhary.

Chaudhary was elected from Kailali-1 to the House of Representatives (HoR) in the general elections held in 2017.

Chaudhary, along with seven other individuals, was convicted of murdering eight police personnel and a minor in Tikapur, Kailali on August 24, 2015. He is currently serving his jail term in Dillibazar Prison.

Home Minister Thapa had met with the agitating groups in Maitighar on March 25 and assured them that Chaudhary will be released soon.

On the same day, Minister for Industry, Commerce and Supplies Lekhraj Bhatt and UML MP Mahesh Basnet had separately reached Dilli Bazaar Jail to talk to Chaudhary, following which the government agreed to form a dialogue team.

The 19-point demands put forth by the agitating groups include accepting the Tikapur massacre as a political movement, withdrawing court cases and releasing jailed activists, providing relief to those who lost their lives during past agitations, and separating Tharu from the Madhesi quota.

Meanwhile, Gauri Pradhan, former member of the National Human Rights Commission, expressed concern over the formation of a negotiating committee which challenges the court’s decisions.

“Trying to reach an agreement by assuring the release of those serving life sentences is a challenge to human rights and the rule of law,” said Pradhan.

Eight people, including SSP Laxman Neupane of Nepal Police and eight security personnel, and a 2-year-old boy, were killed in the violence that broke out in Tikapur of Kailali, which was later termed “Tikapur carnage”.

The Kailali District Court had sentenced 11 people, including Chaudhary, to life imprisonment, 12 to three years jail and one to six months imprisonment on March 6, 2019.

Of the accused, 31 people including Tharu Kalyankarini Sabha central chairman Dhaniram Chaudhary have not been brought to court and their cases have been adjourned. They are on the absconding list with the police.