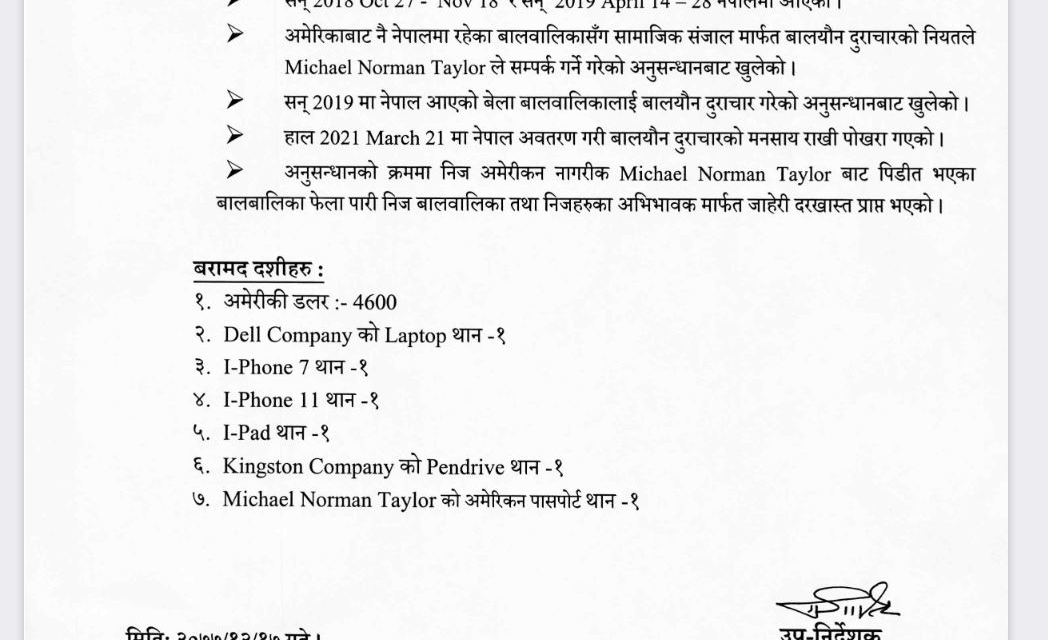 An American national was arrested on Wednesday from Pokhara on the charge of paedophilia.

A team from the Central Investigation Bureau (CIB) of Nepal Police identified the arrested as 66-year-old Michael Norman Taylor, Passport No 566992307, a resident of California, US.

He was arrested from a Homestay at Pame in Pokhara Metropolitan City.

According CIB, police had kept Taylor on its watch list as informal complaints against him had been registered stating that he might be involved in abusing young children, especially those from under-privileged socio-economic background.

Police had received a couple of informal complaints against Taylor in 2019 saying he had sexually abused minor boys. But without a proper complaint against him, police were not able to arrest him then.

But in 2019, District Police Office, Kaski received formal complaints against him from three children and their parents accusing him of sexually abusing the kids. Following which, CIB acquired arrest warrant against Taylor from the District Court, Kaski.

CIB had been keeping a close eye on Taylor’s activities ever since he landed in the country on March 21.

He was being followed by cops in civvies after police received information that Taylor was luring young children and taking them to secluded places such as parks with the motive of sexually abusing them.

According to CIB, they have strong evidences against Taylor to prove that he had been in constant touch with Nepali children via Facebook with the ill intention of molesting them even when he was in the US.

In 2010, French charity worker Jean-Jacques Haye was convicted of raping 10 children at a Kathmandu orphanage.

In 2017, as many as 12 foreign nationals and two Nepalis had been arrested on charges of paedophilia.

According to Nepal Police, seven individuals—one Nepali, three French, one Dutch, one American national and one Indian were arrested on charges of paedophilia in 2018.

At least 25 kids were rescued that year and given psycho-social counseling.

Absence of stringent laws, illiteracy, poverty, and a penchant for foreign tourists are some of the main reasons that has turned Nepal into a haven for foreign paedophiles.

The Criminal Code Act of Nepal provisions life imprisonment for those convicted of sodomising children below eight years old. A similar act provisions jail term of 18 to 20 years if the child victim is between 10 and 14 years old.

The criminal code mandates a three-year jail term and Rs 30,000 in fines for anyone guilty of the above.

Article 66 (3) of Nepal’s Act Relating to Children 2018 also addresses the many forms of child sexual abuse, including the showing of obscene material; creating any such material using a child; any kind of touching, holding or kissing with sexual intent; using a child to stimulate sexual excitement or sexual gratification; or using a child in sexual exploitation or for sexual services.