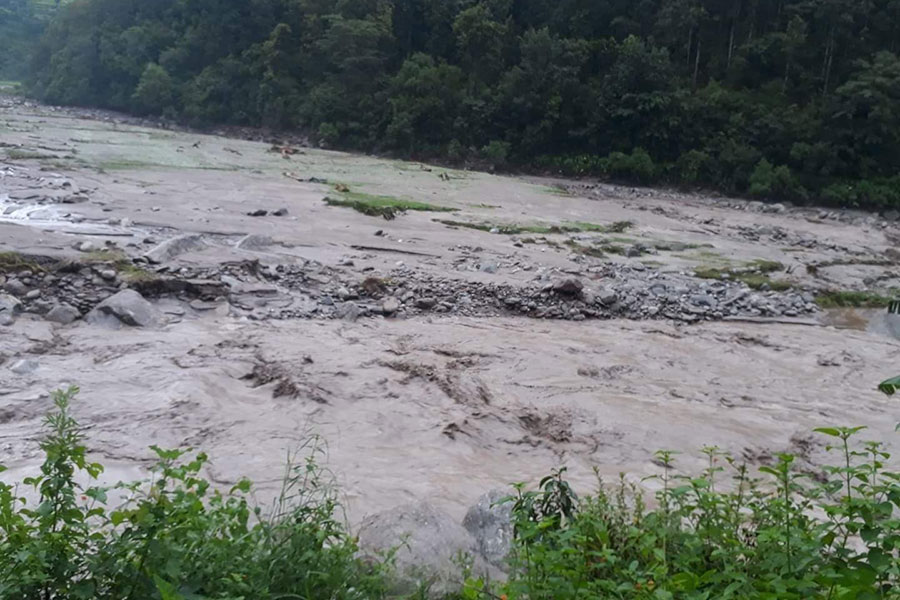 The bodies of 28 out of the 39 people who had gone missing from 13 houses after a landslide in Jugal rural Municipality-2, of Lidi have been found as of Thursday morning.

According to the Sindhupalchowk District Police Office, identities of all recovered bodies have been ascertained. Earlier, the bodies of 24 people were recovered from the landslide debris.
As many as 14 among the identified bodies are children.

Four of the five injured in the landslide have been discharged after treatment while one is undergoing treatment at the Kathmandu-based Civil Hospital.

Meanwhile, 19 people lost their lives in Karnali and Sudurpaschim province to landslides and floods triggered by Tuesday night’s heavy rainfall.

In Achham, bodies of 12 people have been recovered while five are still missing after the swollen Kailashkhola river swept away a settlement in Sainibazaar, Ramaroshan Rural Municipality.

A joint team of police and army personnel, besides Achham Chief District Officer Gokarna Prasad Upadhyaya, has been deployed to search the missing. An army chopper has also been used in the search operation.

Similarly in Bajhang, two minors have died due to a landslide.

According to Chief District Officer Kamal Rajbhandari, Pipala Tamrakar’s son Sachin Tamrakar, 12, and guest Sudip Okheda, 5, died when a landslide buried her home in Bungal Municipality-5, Midi. Pipala, 40, her daughters Sunita, 18, Santoshi, 12, and son Anil, 16, were injured. They are being treated at local health posts.

In Bajura, two persons were killed in a landslide. Min Bahadur Budha’s daughter, Sumi, 3, died when a landslide buried his home in Khaptad Chhededaha Rural Municipality.

His five-year-old daughter Binita and mother Nandadevi, 65, were injured.

Elsewhere in the district, Dhinu Luhar, 75, died after he was swept away when the swollen local Badigad and Dhupe rivers gushed into the locality, according to DSP Tankaraj Bhattarai. Twenty houses were inundated.

In Dailekh, landslide killed Bal Bahadur Rawat, 66, of Bhagawatimai Rural Municipality-5, and Janak Kathayat, 12, of Thantikhandh Rural Municipality. Five persons, including four members of a single family, were injured in the incident.

In Surkhet, Range Khatri’s two-year-old son died when a landslide swept away their home in Simta Rural Municipality-1, Surkhet.