Amid the first wave of the COVID-19 pandemic, daily wage workers were stranded in the Kathmandu Valley when the government suddenly decided to implement a lockdown to curb the virus’ spread.

An organisation called ‘Hamro Team Nepal’ had started a campaign at that time to provide food relief to the needy as they lost their means of livelihood due to the lockdown.

Once again during the second wave of the COVID-19 pandemic, daily-wage workers employed in the Valley were left to fend for themselves after the government imposed prohibitory orders for nearly two months.

Though this time the government informed the public in advance about the forthcoming week-long restrictions, giving people time to leave the city, many stayed back as they thought the prohibitory orders would be imposed for a week or two.

The Valley is still under prohibitory orders, though eased to an extent, till date.

Keeping in mind the dire stutation facing daily wage earners, Hamro Team Nepal once again resumed its food relief distribution program by making a temporary base in a public land, in Anamnagar, Kathmandu.

However, the Kathmandu Metropolitan City yesterday used a dozer to demolish the base being used to provide food relief to the needy, while Nepal Police arrested activists of Hamro Team Nepal.

According to Kathmandu Police Chief SSP Ashok Singh, police had apprehend the Team members for ‘encroaching public land for a year by claiming to be social activists’.

They were released later in the evening.

According to Sapana Roka Magar, a member of the Team, they had constructed a temporary structure on the vacant land near Anamnagar with the approval of authorities of ward no. 29 office.

“Our agreement with the ward office stated that the structure would be removed within a month after the prohibitory orders are lifted,” said Magar.

Ward Chairman Kush Dhakal admitted that the Team had received official approval to use the land as they were involved in social work by feeding the daily-wage workers who didn’t have any other ways to fill their stomachs.

“We had given the Team the permission in writing to use the space with the condition that they vacate the area within a month after the prohibitory orders are lifted. But, the government and the mayor worked in unison to stop the Team and remove their base from Anamnagar,” he said.

Chief Administrative Officer of the Kathmandu Metropolitan City Rajeshwar Gyawali, on the other hand, said that the temporary base was demolished in order to build a public park in the area.

“According to the demand of the locals, drawings and guidelines are being prepared to build a green park there,” he said. 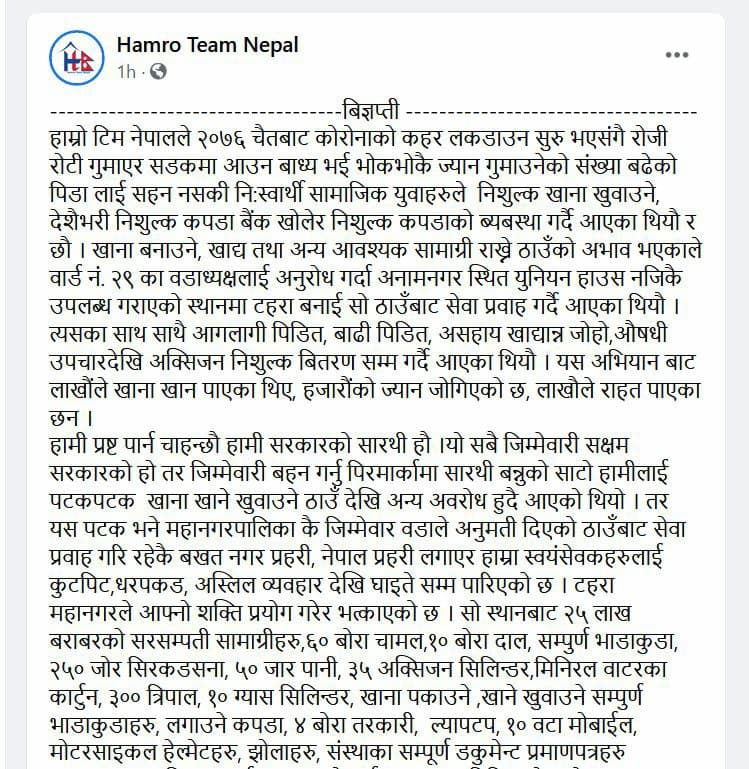