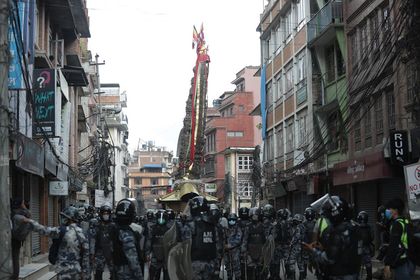 As many as 56 police personnel working in Kathmandu Valley have tested positive for COVID-19.

Among the infected, 18 policemen were deployed to disperse crowd at the Machhindranath chariot procession in Pulchowk, Lalitpur on Thursday.

According to a source, 18 officers from Lalitpur police station and Satdobato have been confirmed infected and they were on duty when the clash between locals and police erupted in Pulchowk on Thursday.

Meanwhile, one of the 17 people arrested for beating a traffic police officer during Thursday’s clash has tested positive for coronavirus. The results of remaining others have yet to arrive.

According to a Lalitpur police official, the arrested have been kept in quarantine till their PCR test results arrive.

The Metropolitan Police, Lalitpur had tested the arrested for COVID-19 before asking the court to extend their remand for further investigation.

Traffic police constable, Kamal Ghimire, was brutally beaten by a group of people when a clash ensued between locals and police as the former began towing the Rato Machhindranath chariot in defiance of the government imposed COVID-19 restrictions.

A meeting between the administration and the locals after the incident decided to tow the chariot on Sunday by adopting social distancing and health precautions.