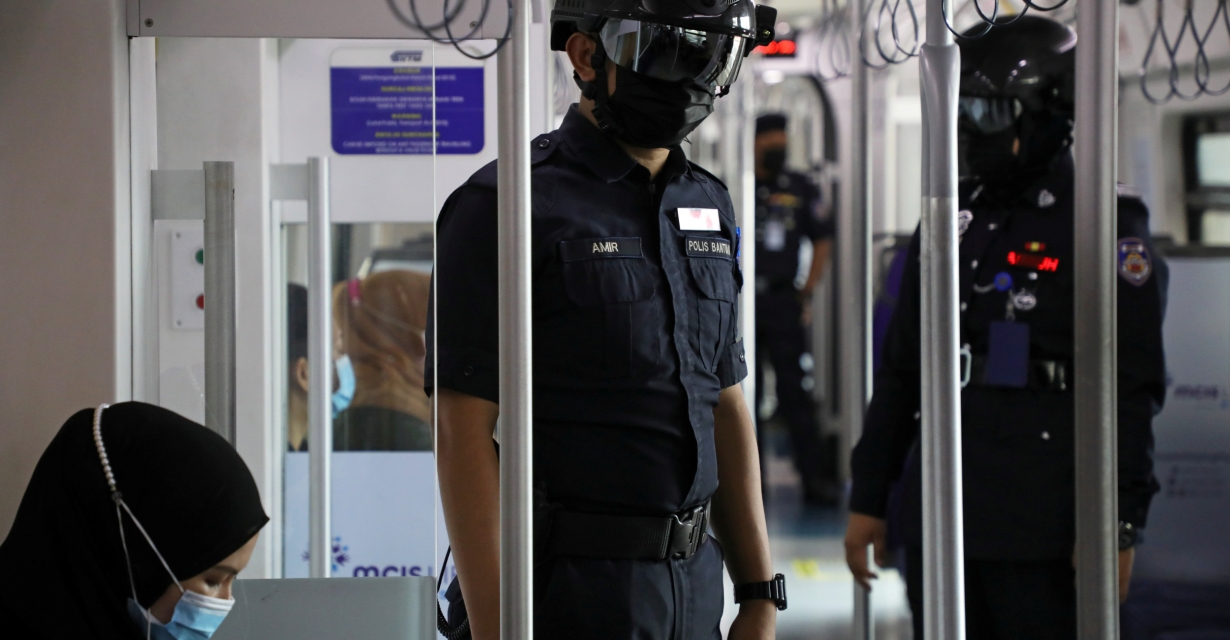 Auxiliary police officers wearing 'Smart Helmet', a portable thermoscanner that can measure the temperature of passengers at a distance, patrol inside a commuter train, amid the coronavirus disease (COVID-19) outbreak in Kuala Lumpur, Malaysia October 14, 2020. REUTERS/Lim Huey Teng
What you need to know about the coronavirus right now
Read Time: 3 minutes

Eli Lilly and Co said on Tuesday that the government-sponsored clinical trial of its COVID-19 antibody treatment, LY-CoV555, similar to one taken by U.S. President Donald Trump has been paused because of a safety concern.

It is not uncommon to pause drug trials to investigate safety concerns, and such actions do not necessarily indicate a serious problem. These trials have come under intense scrutiny due to the urgent need for drugs and vaccines to tackle a pandemic that has claimed over 1 million lives worldwide, and the speed with which they are being developed.

Separately, U.S. drug inspectors have uncovered serious quality control problems at an Eli Lilly and Co pharmaceutical plant that is ramping up to manufacture the Regeneron drug, the other promising COVID-19 drug touted by Trump as “a cure” for the disease, according to government documents and three sources familiar with the matter. The findings complicate the drugmaker’s bid for a so-called emergency use authorization (EUA) from the federal agency, two of the sources and two outside legal experts told Reuters.

As coronavirus infections surged in Malaysia this year, a wave of hate speech and misinformation aimed at Rohingya Muslim refugees from Myanmar began appearing on Facebook, with the Rohingya being accused of spreading the coronavirus. Reuters found more than three dozen pages and groups, including accounts run by former and serving Malaysian security officials, that featured discriminatory language about Rohingya refugees and undocumented migrants.

Facebook removed 12 of the 36 pages and groups flagged by Reuters, and several posts. Five other pages with anti-migrant content seen by Reuters in the last month were removed before Reuters queries. Malaysian government departments, including the office of Prime Minister Muhyiddin Yassin, did not respond to Reuters queries and requests for comment.

Countries straining to contain a second wave of COVID-19 are turning to faster, cheaper but less accurate tests to avoid the delays and shortages that have plagued efforts to diagnose and trace those infected quickly.

PCR tests detect genetic material in the virus while antigen tests detect proteins on the virus’s surface, though both are meant to pick up active infections. Another type of test, for antibodies the body produces in response to an infection, can help tell if somebody has had COVID-19 in the past. Antigen tests can also produce more “false negatives”, prompting some experts to recommend they only be used in a pinch.

Various hitches in different countries around testing highlight a conundrum for governments: how to get people back to work while tracing the virus within the population quickly – without running out of supplies.