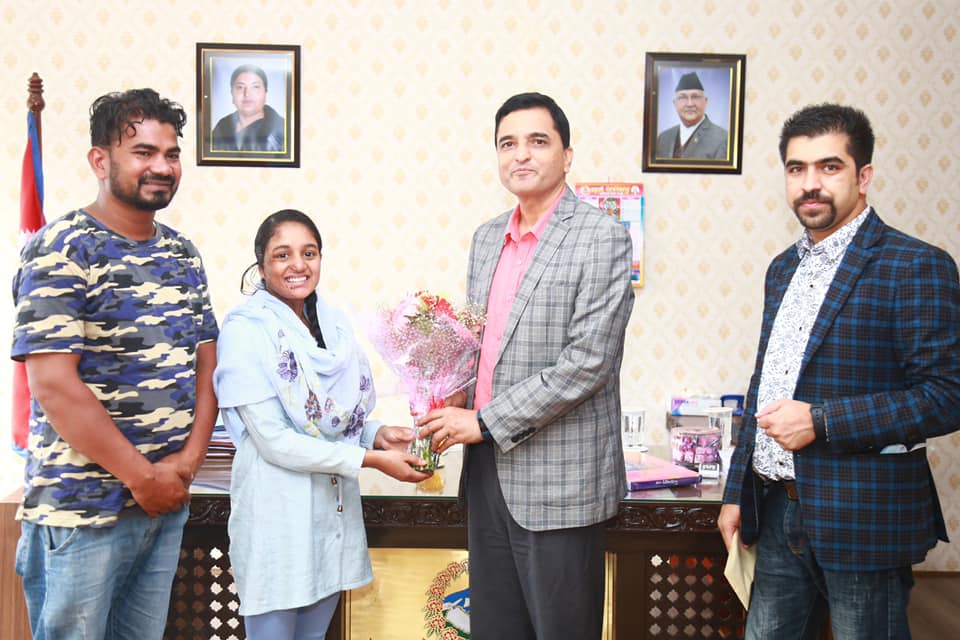 Minister Bhattarai had called Khatun, a grade nine student, to the ministry on Sunday and provided her Rs 50,000 cash to help with the study expenses.

14-year-old Khatun is a permanent resident of Birgunj and currently residing in Kathmandu. Two teenage boys had attacked Khatun with acid while she was on her way to her school from home at around 6:00 am on September 6, 2019.

Minister Bhattarai said that he decided to provide Khatun with the fund hoping that it will financially assist her education instead of spending the money for unnecessary partying on his birthday.

Minister Bhattarai has been regularly helping the less privileged, victimized, and destitute children during his birthdays since 2015 (2072 BS).

Earlier, Minister Bhattarai had sponsored the education of Biraj Adhikari, a child from Manmaiju, Kathmandu, who lost his father in the 2015 earthquake.

On his 2016 birthday, the minister rescued Dorji Sherpa who had been kept as a domestic help for being unable to pay the loan taken by his parents. Minister Bhattarai had brought Sherpa to Kathmandu and sponsored his studies.

Similarly, on his birthday in 2017 Minister Bhattarai had financially assisted in the treatment of Milan Sherpa of Taplejung, a heart patient who had to replace both his valves.

On his birthday in 2018, Minister Bhattarai provided financial assistance for the school education of two impoverished kids of Taplajung – Ganga BK and Kamal BK.

Likewise, in 2019 he sponsored school education for Sameer Rai, a child with blind parents in Taplejung.

According to a police study, nearly all acid attacks are perpetrated by men who act in revenge because the young women rejected their advances.

Though the Parliament’s Women and Social Committee in August directed the Office of the Prime Minister and Council of Ministers, Ministry of Women, Children and Senior Citizens, and National Commission for Women to provide education, health treatment, employment, and social rehabilitation to the victims of acid attacks, little has been done to update existing laws that allow the crime to happen.

The parliamentary committee has said that the punishment in the existing law is not enough of a deterrence and has instructed the Ministry of Home Affairs to start the process of amending the law to make way for stricter sentencing. The Office of the Attorney General under Agni Kharel on 2 August formed a committee headed by Deputy Attorney General Bishwaraj Koirala to look into the laws and submit a report within a month.

Despite dozens of cases of women suffering acid attacks surface each year, calls for stricter laws and control in acid sales have not been heard by authorities concerned.

Though organizations like WOREC, SIKSA, and BVS are helping the survivors seek justice through the court, they face numerous legal hurdles. Since most victims survive acid attacks, the courts do not register the cases as ‘attempted homicide’.

Activists believe that acid attacks on women as just the outward manifestation of widespread hidden discrimination and cruelty faced by Nepali women.