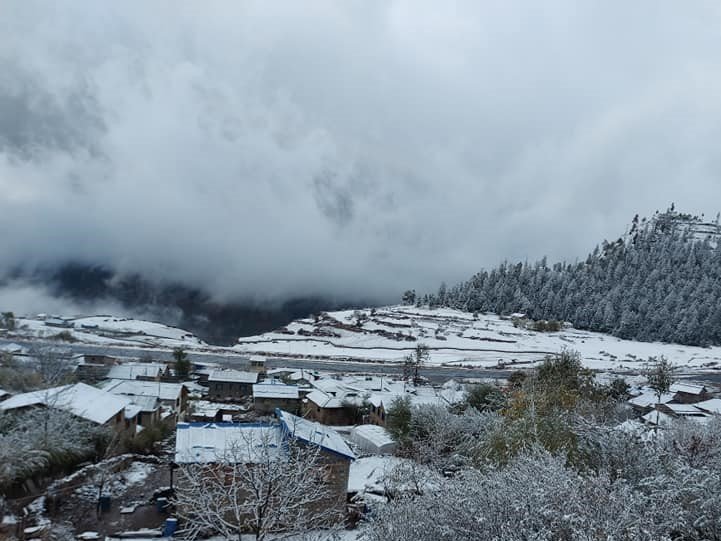 According to the Department of Hydrology and Meteorology, most parts of the country will witness rainfall for the next three days and light to moderate snowfall in some parts of the high hills and mountains due to the effect of westerly winds.

According to the National News Agency (NNA), along with the snowfall, water has frozen in rivers and streams. Vehicular movement in those areas has been hit due to the snow. After the snow shrouded the grazing area, locals have started keeping their livestock inside the barns.

Similarly, it has been snowing in the upper part of the Himalayan district Manang since Monday afternoon. According to Chiring Nesyang Gurung of Manang Ngisyang-1, upper region is covered with more snow while less snowfall was witnessed in the lower region.

The temperature in Manang has dropped to minus 8 degrees Celsius.

Along with the change in weather, snowfall can be seen in Lho, Samagaun, Chumche and other areas of northern Gorkha. Mingmar Lama, a local of Samagaun, informed that agriculture in the upper area has been stopped due to snowfall.

People’s movement and transportation of goods on mules have also been severely affected.

Meanwhile, people’s daily life has become difficult due to snowfall in different parts of the upper and lower parts of Dolpa district.

Similarly, daily life has been hit in Gurja and Ghorepani of Myagdi district due to freezing cold.

Gurja Ward Chairman Jhak Bahadur Chhantyal informed that the hills near the village were covered with snow, the temperature had plummeted significantly and people celebrated the Tihar festival indoors.