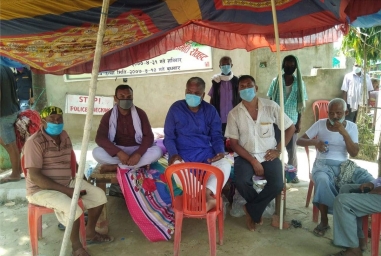 The probe committee which was formed to launch an inquiry into the death of Bijaya Ram of Garuda Municipality, Rautahat, has recommended action against six policemen, including SP Rabiraj Khadka.

Police had arrested Bijaya and six others on August 16 in connection with the murder of Nirajan Ram, 20, of Jigadiya, Garuda Municipality.

After Bijaya’s death at the Birgunj-based National Medical College on the night of August 26, his relatives and local Dalit leaders, who alleged that police had killed Bijaya by meting out excessive torture in custody, started a fast-unto-death strike in the hope of getting justice.

As the situation intensified, the Home Ministry formed a three-member inquiry committee to probe the incident mandating it to submit a report with deadline of two weeks.

The committee led by Home Ministry under-secretary Dolendra Niraula submitted its report to the Ministry on September 17, holding SP Khadka and others responsible for the Bijaya’s death.

The report has pointed out poor command control of SP Khadka and sought re-investigation into the case led by DSP Gyan Kumar Mahato. Action as per the law has been recommended against other policemen found guilty.

Meanwhile, Dalit activists have also accused the police of causing another person, who was also taken into custody with Bijaya, to lose his mental balance by meting out extreme physical torture.