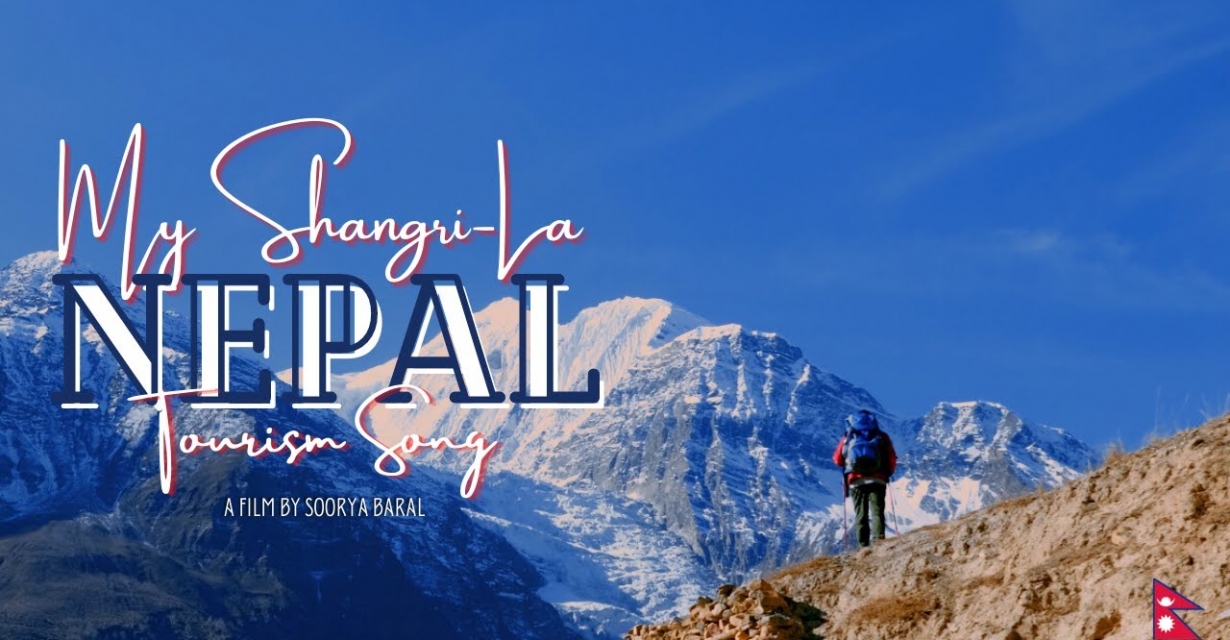 Shangri-La: Musical video / travel film to promote Nepal Tourism over the world released
The objective of the song, through this music video Shangri-La is to attract both international and domestic tourists to this land of Shangri-La that Nepal has been called since Nepal was opened to the world in 1950’s.
Read Time: 2 minutes

A new musical video / travel film “Shangri-La” has been released in a bid to promote Nepal across international and domestic audiences. The filming of this music video, which commenced in 2019, takes viewers across various places of Nepal – all offering a glimpse into the country’s magnificence – be it in the mouintaneuos region, the hilly region, or the Terai.

The music video depicts the magnificence of Nepali landscape, Nepal’s rich cultural heritage and endless beauty as seen from the eyes of a wanderer who is fascinated with Nepal.

The music video, the first of its kind in the English language has been produced and directed by Soorya Baral. It is written by Prem Bahadur Basnyat – a filmmaker and writer. The music video is composed by the legendary Surbana Limbu and sung by Preeti Kaur.

Ever since the Time magazine story titled ‘Goodbye Shangri-La’ was printed in 1992, Nepal’s travel trade and hospitality entrepreneurs along with government tried to clean up Nepal’s tainted image by holding Visit Nepal in 1998 and other events benefiting Nepal’s tourism.

Nepal was beginning to see good results as tourism started increasing again. But unfortunately again, Nepal’s tourism took another blow due to the decade long internal conflict, strikes and shutdowns, then the 2015 earthquake and again the Indian blockade.

Nepal once gain tried hard to bring home two million tourists by organizing Visit Nepal 2020. The tourism entrepreneurs and the people were very hopeful and happy that Nepal’s tourism would bounce back again. But again unfortunately Covid-19 shook the world and Nepal too was forced to cancel Visit Nepal 2020.

According to Soorya Baral, “This music video which is released today will also be aired through Dish Home channel and played in Nepal Airlines in-flight entertainment services on international flights.

“As the director and producer, my further plans are to disseminate this music video Shangri-La through various other means (social media, travel and trade fairs, etc.)”, he added.

Let us all jointly ‘UPLIFT TOURISM IN NEPAL.’ he concludes.