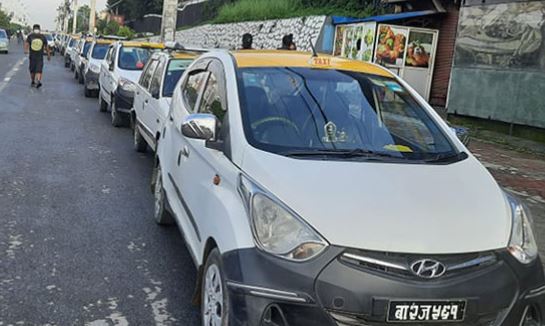 Taxi drivers and taxi owners resorted to agitation stating that the government had barred them from earning a living under the pretext of the national lockdown while all other businesses had resumed.

The taxi entrepreneurs also said that the government had failed to provide them with any kind of relief package although their mode of livelihood had come to a grinding halt during the months-long national lockdown.

They had parked some taxis along the New Baneshwor-Tinkune road section on Tuesday morning and staged a peaceful protest with placards.

The taxi drivers and owners carried placards with slogans that read ‘We will die of hunger, not disease’, ‘Landlord is asking for room rent, ‘Let us work or provide us a job’.

Chief of Kathmandu MTPD, SSP Bhim Prasad Dhakal, told media that 308 taxis have been taken under control so far. He said that the taxis would be released in the evening.