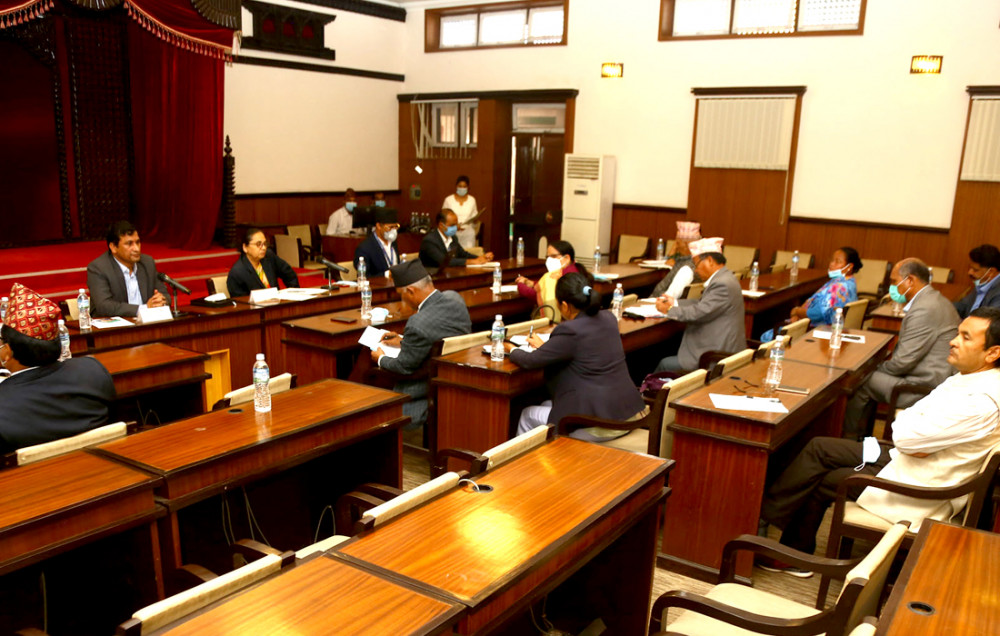 A meeting of the Parliament’s Agriculture, Cooperatives and Natural Resources Committee. Image via RSS
Not homes but cow sheds of Chepangs were burned, claims Environment Minster Basnet
Read Time: 4 minutes

Minister of Forest and Environment Shakti Bahadur Basnet has reiterated that the houses belonging to Chepang community that were burned by Chitwan National Park authorities were merely cow sheds and not homes.

Minister Basnet has drawn flak for saying that the huts were not actually houses because they did not have kitchens.

Speaking at the Parliament’s Agriculture, Cooperatives and Natural Resources Committee meeting on Wednesday, Minister Basnet said, “Homes, be it big or small, have kitchens. But if a building structure doesn’t have a functioning kitchen, it cannot be called a home regardless of its size.”

On July 26 during a meeting of the Law, Justice and Human Rights Committee of the House of Representatives, Minster Basnet had claimed that the Park authorities had only burned cow sheds and not homes of Chepangs.

He has been slammed from various side for his “insensitive” remark.

The Environment Minister also urged Parliamentarians to not believe in the photos published in traditional as well as social media that showed the burnt-out Chepang settlement.

“Photos of other cities from 2019 are being circulated by the media claiming them to be of the Chepang settlement. Such fake and misleading photos are being published by some forces to incite violence and for political gain,” claimed the Environment Minister.

Stating that among the 201 Chepang households in the Kusum Khola area, 193 households had already been rehabilitated, he said, “The cow sheds were burned in the process of rehabilitating the remaining eight households. It is however sad that the sheds belonging to Chepangs were burned and destroyed by using elephants.”

He informed that the warden and assistant warden of the Park had been recalled for further investigation of their involvement in the incident.

Parliamentarians present in the meeting condemned the act of burning Chepang settlements while some accused Minster Basnet of being the main culprit behind the incident.

On 18 July, authorities at Chitwan National Park, a UNESCO World Heritage site, set two houses ablaze and destroyed eight others with the use of elephants in a Chepang settlement. The attacks were carried out without any prior warning.

The Chepang families, belonging to one of Nepal’s most marginalised communities, lost not just their homes but also their money, identity documents and other possessions.

This is the second such attack that Nepal’s indigenous people have faced in two months.

In June, the authorities at the Bardiya National Park attempted to forcibly evict members of the landless Tharu community from their settlements there.

Such a move by Park authorities has been a subject of critique from various national and international rights organizations with Amnesty International releasing a press statement that read, “No one should be subjected to forced evictions. It is appalling that during a pandemic and ongoing rainy season, when having a home is critical to keeping oneself safe, Nepal’s authorities have chosen to dispossess some of the most marginalised people and make them homeless.”

“Nepal’s authorities should be focusing their energies on addressing the human rights of all including Indigenous peoples at this time, including their rights to adequate housing and access to livelihoods.”

Moreover, on July 22, Rajkumar Chepang allegedly died due to severe thrashing at the hands of army personnel deployed for the security of Chitwan National Park.

The family of the deceased has claimed that Rajkumar, who had gone to the area around the Rapti River to collect small snails, was taken under control by army personnel deployed at Chitwan National Park and severely beaten before being released.

They have also alleged that Rajkumar died within a few days after he was thrashed by army men.