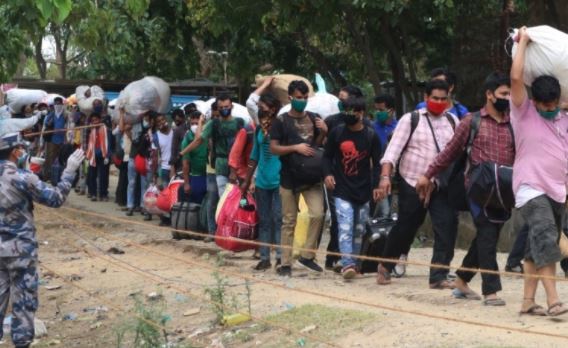 After India and Nepal relaxed the first stint of the lockdown imposed to prevent the spread of COVID-19, tens of thousands of Nepali migrant workers in India began to head home.

During the biggest festivals of the Nepalis — Dashain, Tihar and Chhath, many migrant workers return home. But this year, contrary to the trend, many Nepalis of Sudurpaschim Province are leaving the country just before Dashain and Tihar.

Yesterday morning, a total of 237 youths had set out for various cities in India via Gaddachauki check point bordering India.

DSP Amar Bahadur Thapa of Kanchanpur District Police Office said that unlike in the previous year, this year an astonishing number of Nepalis are leaving for India just ahead of the festivals.

India has been the most viable labour destination for Nepalis of Sudurpaschim Province.

More than 200,000 Nepalis had returned home through Gaddachauki check point since the nationwide lockdown imposed on March 24 by the federal government to contain COVID-19, this year.

Due to lack of job opportunities in Nepal, they were compelled to set their sights elsewhere.

One such person was Kallu Tamata of Bhimduttanagar Municipality.

He was heading towards Punjab in India along with his spouse and kids in pursuit of employment.

“Fending off hunger is more important than celebrating festivals,” he responded when asked why he was leaving his hometown just ahead of the festivals.

Sudurpaschim Province government has received applications from youths aspiring to be self-employed through the government’s schemes.