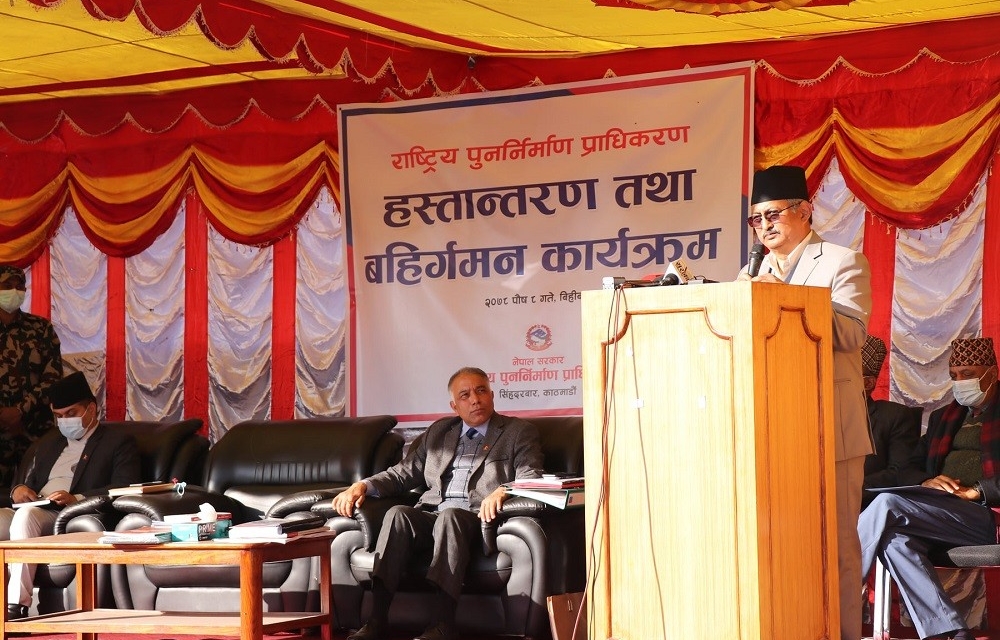 The National Reconstruction Authority (NRA) has been formally handed over to the designated bodies on Thursday as per the decision of the Government of Nepal.

The NRA ceases to exist from today handing over the remaining responsibilities and capital to the Department of Urban Development and Building Construction and National Disaster Risk Reduction and Management Authority (NDRRMA).

In the presence of Home Minister Bal Krishna Khand, Secretary Sushil Chandra Tiwari handed over a file, including documents related to major structures reconstructed including Dharahara, Singha Durbar, Ranipokhari and Shantibatika, among others, to Urban Development Ministry Secretary Maniram Gelal.

Likewise, the remaining works for reconstruction and rehabilitation, legal and policy arrangements, implementation of decisions and orders received from the Appeal Committee and coordination related facilitation and monitoring was handed over to the NDRRMA.

NRA was established for reconstruction and rehabilitation after the Gorkha earthquake of April 2015. The Government of Nepal had extended the term by five years due to non-fulfillment of responsibilities. The extended period is coming to an end on December 26.

On the occasion, CEO Gyawali claimed that the NRA had succeeded in fulfilling the responsibility entrusted to it by the government during the challenging times with the help of the general public.

Also speaking on the occasion, Home Minister Khand said that the NRA has accomplished important milestones in rebuilding the structures damaged by the 2015 earthquake. He also thanked the NRA for its diligent completion of the construction of structures of archeological importance damaged by the earthquake. “Reconstruction-related data and work will be useful for researchers around the world.”

He said that the NDRRMA will finalize the remaining technical and administrative work of the Authority.