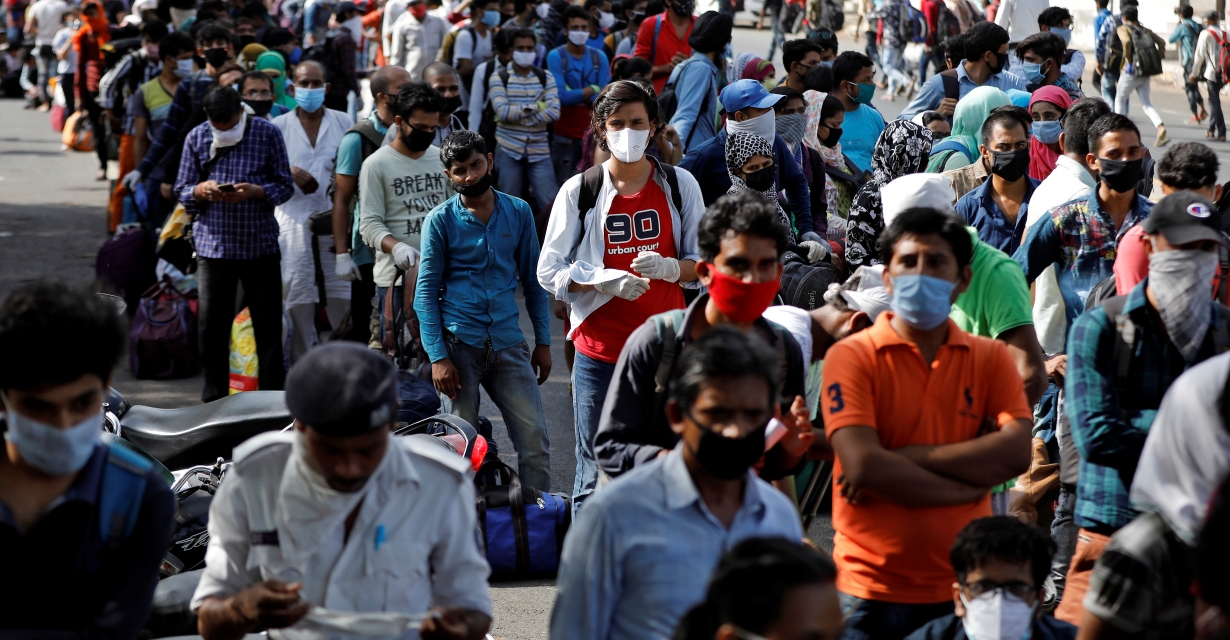 People wait in queues to enter a railway station to board a train to New Delhi after a limited reopening of India's rail network following a nearly seven-week lockdown to slow the spreading of the coronavirus disease (COVID-19), in Ahmedabad, India, May 12, 2020. REUTERS/Amit Dave
India to provide $266 billion to boost pandemic-hit economy; Changes in Labour Law puts workers’ rights at risk
Read Time: 3 minutes

Prime Minister Narendra Modi yesterday said that India would provide 20 trillion rupees in fiscal and monetary measures to support an economy battered by weeks-long lockdown to fight the novel coronavirus.

India has more than 70,000 cases among its 1.3 billion population and is set to surpass China, the origin of the outbreak, within a week.

Modi said strict stay-at-home orders would be extended beyond May 17 with a new set of rules.

In March, the government said it was providing around 1.7 trillion Indian rupees in direct cash transfers and food security measures, mainly for the poor, but was widely accused of doing too little.

In an address to the nation, Modi said details of the new package, as well as reforms of land and labour markets, would be released within days:

“The package will also focus on land, labour, liquidity and laws. It will cater to various sections including cottage industry, medium and small enterprises, labourers, middle class, industries, among others.”

One the one hand while Modi is announcing reliefs targeted to the country’s poor and middle-class population, several Indian states are bending labour laws to benefit big businesses.

Workers in India are set to face longer days and lower pay in a “race to the bottom”, academics, activists and unions said, as six states plan to suspend labour laws to help industry recover from the coronavirus lockdown.

Despite a spike in COVID-19 cases this week, India is looking to ease its seven-week lockdown amid increasing pressure from business leaders and ordinary people who say the strict curbs have destroyed the livelihoods of millions of workers.

Labour specialists warn, however, that the decision of states to suspend federal and state labour laws enshrining workers’ rights would push even more people into the informal sector, drive down wages and erode working conditions.

Under the planned labour law suspensions announced so far, working shifts in the six states would be extended from eight hours to 12 hours for a three-month period.

They also want to suspend legislation guaranteeing minimum wages and the formation of worker unions for up to three years.

Social security benefits including welfare funds or provisions for the health and safety of women employees would also be cancelled in some states.

Officials in the six states say the measures will help local industries to bounce back and reverse losses incurred during the lockdown, and also lure new investment.