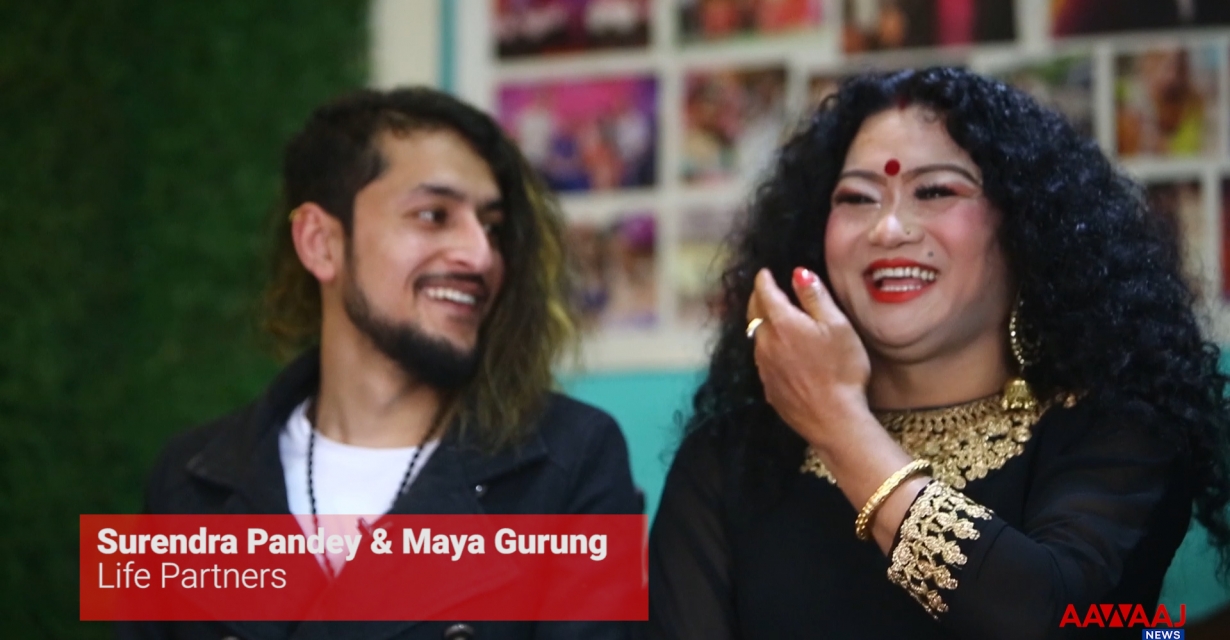 Be it in a tea shop, or at any event, of the many topics of discussion we pursue, freedom and equality often centre our discussions. We find ourselves constantly advocating for things we deserve.

Sometimes, we tend to overlook certain sections of society, and their political identities – or their pursuits to be acknowledged for who they are – the LGBTQI community, often being one of them. Stories of LGBTQI, their experiences while coming out, the stigmatisation they face, or even the support that they receive are not subjects of discussion in what we traditionally call the mainstream.

For the LGBTQI community, while significant progress has been made, total acceptance is still a long way. While the community continues to seek further legal recognition, and acceptance, their lives don’t stop – they at times are seen thriving. Happiness is the key – like for every one of us.

Today, we bring to you, the story of Surendra Pandey and Maya Gurung. While finding love and support in each other’s arms, they have also been able to successfully and proudly break traditional gender roles.

Surendra Pandey and Maya Gurung met in Nawalparasi, Maya’s hometown several years ago. “We met in a local eatery in Nawalparasi. We started talking, and I started developing feelings towards him”, shares Maya.

Today, they have been married as per Hindu tradition for six years, and continue to enjoy each other’s company as life partners.

Holding Surendra’s hand tightly, she tells us that “being married to Surendra is a dream come true” But life wasn’t always this contained for Maya. “Maya’s childhood was spent in Lamjung, and it was around at the age of eight Maya found herself unable to conform to her assigned sex.

“I was born a boy, but would find myself more feminine, and attracted to boys”, she shares. Being born as a Mukhiya’s son added more pressure on her, and she was unable to express her feelings. She feared the shame it would bring on her family.

However, today, she has risen above it all, and finds herself fighting for LGBTQI rights in Nepal. Gurung has been associated with the Blue Diamond Society since 2001.

On the other hand, Surendra realised his sexual orientation only after meeting Maya. Interestingly, prior to meeting Maya, Surendra had been in a relationship with a girl, and had only recently broken up with her.

Though the couple has come a long way, it is still really difficult for them to cope with society. Although Nepal’s constitution has provisions to safeguard LGBTQI Rights, they are faced with daily harassment and discrimination. Maya’s family has come in terms with her gender identity, whereas Surendra’s family is yet to accept his orientation.

Gurung also makes it a point to highlight the lack of mental health support towards the community. Two years ago, her friend, who was a homosexual committed suicide due to lack of his family’s acceptance. “Had he had more support, perhaps he would be with us today”, she adds sadly.

Nepal’s 2015 constitution has recognised LGBT rights as a fundamental human right, and won international admiration for incorporating the same, however, the ground reality is bleak.  Equal rights to marriage, property, and education are still denied to members of the LGBT community. And they continue to be harassed and discriminated on a regular basis, at many instances physically, sometimes resulting in murder.

“As a couple, we never cared about what people would say. This is the reason we have been able to hold our love and affection without being affected. All we cared about was how to take this relationship further and develop a bond that would last for forever and ever”, shared Maya.

This year’s Valentine’s Day for the couple was a special one. “We attended a lovely Valentine’s themed event where we cut a cake and re-prophesised our love to each other. It was really special,” shared Surendra.

This couple is also urging the government to provide a legal status for the marriage of individuals from the LGBTQI community. Furthermore, saying that legal documents and identification can help us attain a life like any other normal couple can.

Lastly, advising all the couples who are hiding because of their identity to come out and fight for their rights, this couple said, “Time has changed and it’s time we be open about our relationship. If we hide now and don’t fight for our rights, future generations will suffer even more. ”