The Theatre Village team returned with a resounding drumroll with a dramatization of Narayan Wagle’s acclaimed novel “Palpasa Café” (2005) at Mandala Theatre last month. Shows ended on May 8. I am unfortunate in having not read the novel in its original or its English translation, but it also saved me the angst of having to compare the production’s many transformative aspects with its novelistic original, a transformation (here scripted by Suraj Subedi) that any fine work of literature must necessarily undergo to be adapted to stage or screen, as we move from the world of language alone to added, extra-linguistic features.

Bimal Subedi’s involvement immediately raises the bar in terms of overall design. This time, the aural precedes the visual. Even as we waited for the show to come on, muted lights pooled around musical instruments and a stereo player. I took it as a key towards reading the performance, since directors usually set up the pre-opening scenario as a key, much like an epigraph in a novel. I was not disappointed — the one aspect which never failed to deliver was the sound. Whether be it the almost unbearable tension that peaked even before the play started, through the rubbing of human palms on balloon surfaces, or the frenetic, mechanically repetitive but mesmeric screech of an artist’s charcoal moving on canvas when drawing his muse, or the sharp, gunshot staccato of aluminum dishes landing on stage, relentlessly. Relentlessly, for minutes on end.  This relentless repetition works as a key motif throughout the play, usually seeping through gestures. All sparked off near the very beginning, by the artist’s worn-shoe-clad feet, keeping beat to “Norwegian Wood” in faraway Goa. 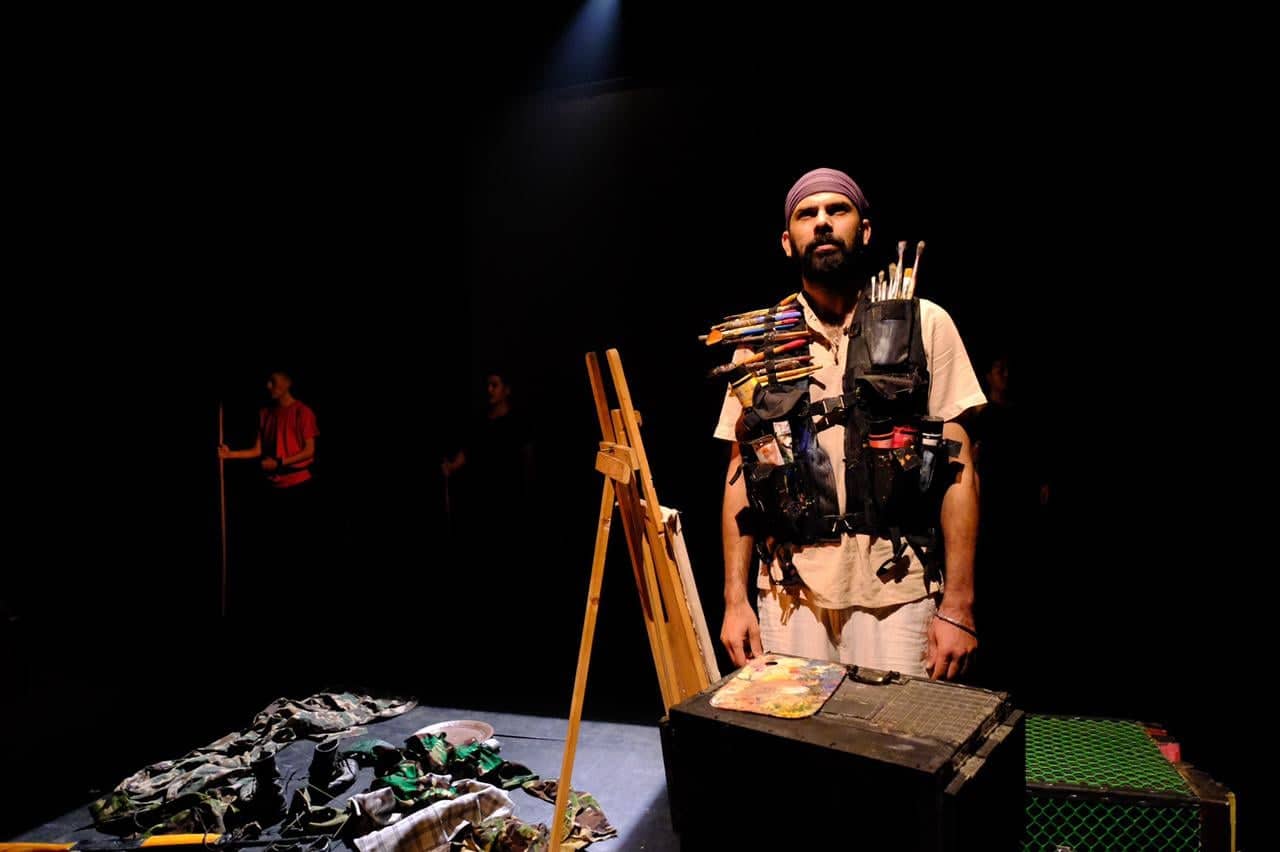 The artist is Drishya, played by director Bimal Subedi himself. We follow him for the next couple of hours on his journey through a civil war-torn reality in Nepal. The first few scenes are almost disembodied in their overt romanticization, a feature well-embodied by Shristi Shrestha. Her incredibly out-of place good looks provide the enduring, dream-like contrast to the dark reality the play soon reveals. Her positioning as a diasporic documentary-maker come back to Nepal, running from the pulls and indifferences of her passport-homeland, her naïve insistence on finding an integrated self against fractured realities is disconcerting but aptly portrayed. Her unfounded presence remained ethereal and unreal throughout, as a counterpoint to grim reality. As was obviously intended? 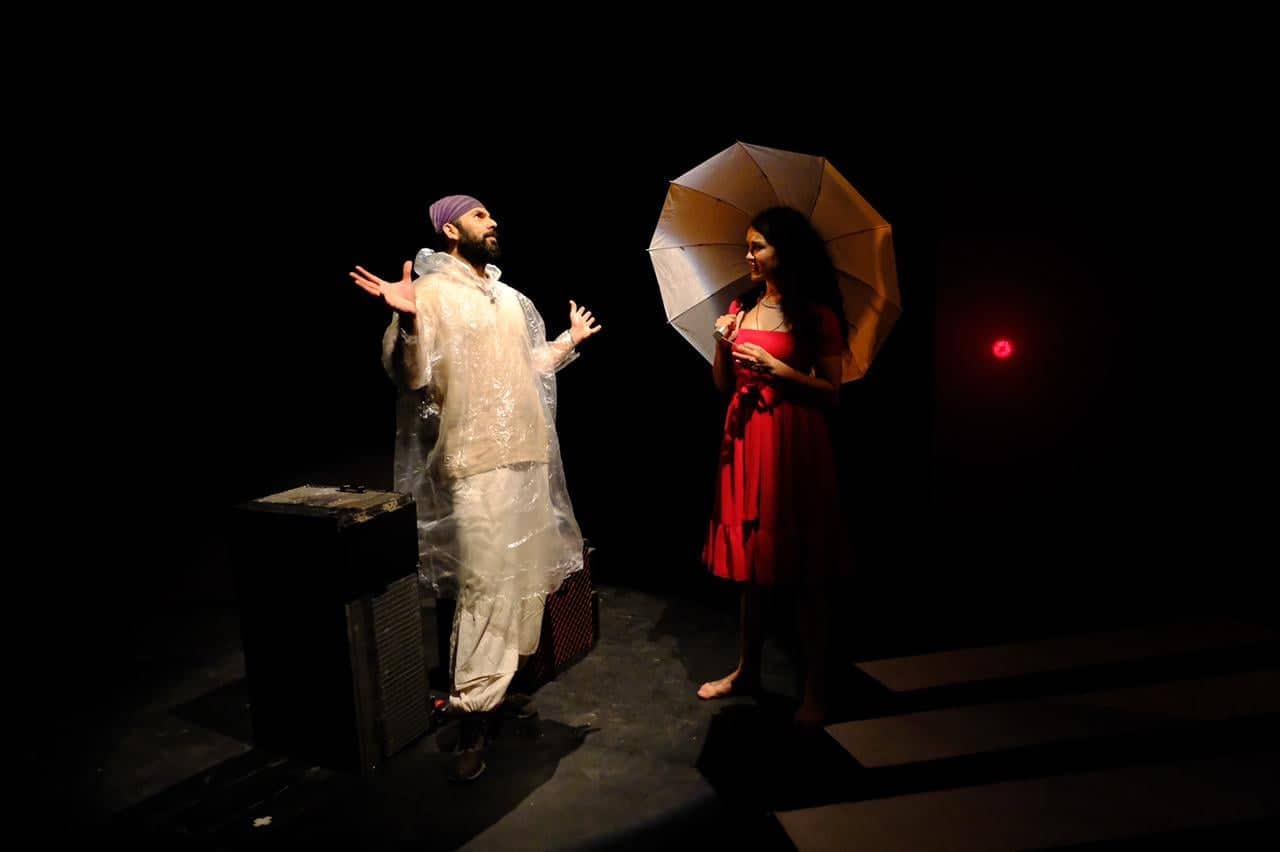 Drishya’s journey through Nepal’s revolutionary ordeal is progressively intense, grounded. That culminates in the scene with the child Saani Fuchhi played by Purnima Acharya almost to perfection. The everyday, real-life insistence of that long scene will stay with us all who have watched the play. It was a joy verging on the fairytale. But the audience knew that all such fairy tales must end gruesomely in our world. As did this one.

Visual metaphors, symbols, are strewn across the performance. The red colour of entangled wool reeks of raw wounds when Drishya meets the amazingly elegant, culturally-embedded Hajuramma, who is mourning the disappearance of loved ones. The play ends with her, played by Sangeeta Thapa, stringing wool from neat, white balls across the stage front, end to end, again and again, painstakingly creating visual static to wipe out or “disappear” Drishya right in front of our eyes. Letting engineered forgetfulness take over. Or letting his own identity dissolve. Erasure is a key theme. Skillfully executed often through the swift disappearance of fabric, be it the red silk under Palpasa’s feet, or the fragmentation of fatigues lying on the studio floor. 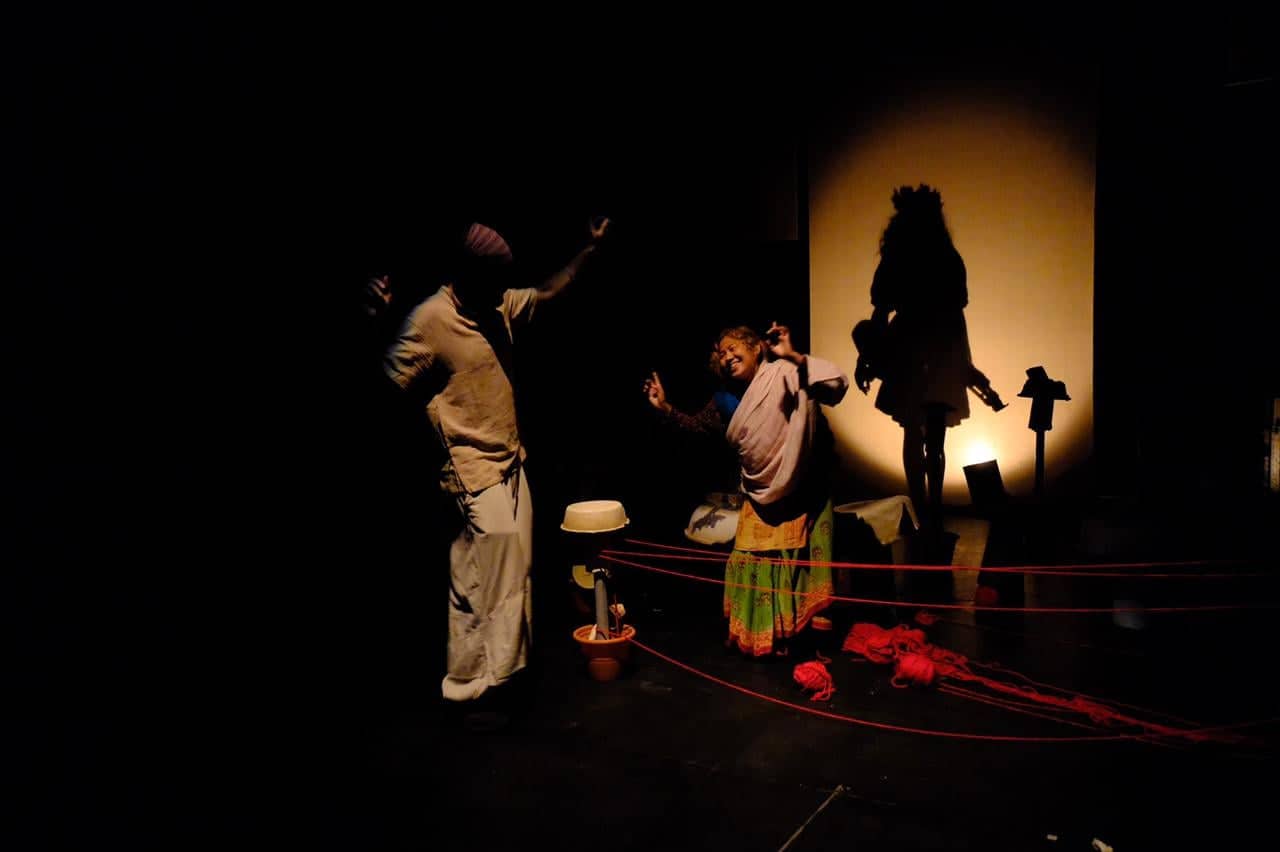 The human toll of the revolution is the focus of this play. Drishya’s concern is clearly the same when he must argue with his long-lost friend Siddhartha acted by Dipesh Rai, now a commander in the revolutionary forces and adeptly turns into a “sahid” much later, when Drishya accompanies him on his journey. The human toll is what endures as a message, the absolute irrationality of violence, of taking sides, of taking lives, of forced conscriptions of children. Of the relentless agony faced by those left behind. The scripting and directorial team, that included Dilip Ranabhat, seem to have consciously made the choice of meeting gory violence at a tangent, through symbolic gestures and visual metaphors instead of assaulting us directly. The effect was often poignant. And should be lauded for it avoids the easier, popular option of enactingviolence and lending to itsperpetuation.

We are at war as a world right now, taking sides with Ukraine and Russia, or both. The play reminds us how random, irrational and unnecessary that violence is. And how that unravels lives — a father losing his only daughter to the cause, for whom he tries to buy reprieve buy paying the money set aside as her school fees. He fails. Right after the most visually striking scene, which will always be the dish-throwing scene. Where gunshots resound through the auditorium as aluminum dishes hit the stage-floor. Was that also a covert critique of what a village girl’s everyday future might look like? She did enact it, feverishly cleaning as if to save herself in the face of slyly disguised, militant coercion. Was it also not a metaphor for a future lifetime otherwise spent in cleaning dishes? Should it be a surprise then that she is taken by the rhetoric and jargon of a better world, which was supposedly meant to free her father too? Both Jenny Sunuwar and Bachchu Himangshu live up to their roles. As do every one of those enacting the revolutionaries and the national army. Their stoic, blank faces contrast sharply with their agility – be it in a dance of death, or with the guns.

The acting is generally good, occasionally reaching the sublime. Lighting was apt. The excess of props and projections sometimes costs the production but again adds to it by drawing our focus away from language. Whether the play delivers the novel on stage is perhaps the wrong question. Whether it delivers what the creators set out to do, must take precedence. And the focus very much seems to be on unmooring our bearings, taking us away from right or wrong and opening up those gaping wounds that violence leaves, always, in its trail.

The play unfurled itself, like an epic Russian novel from a time long past – the expanse of Tolstoy and the interiority of Dostoyevsky combined. That was a Russia that inspired us for generations, not the one we see today. The epic range of the performance left me embarrassingly teary eyed. All I can say is, that does not happen often. Gotta go, I need to buy meself a “Palpasa Café”! And yes, Theatre Village is happening. 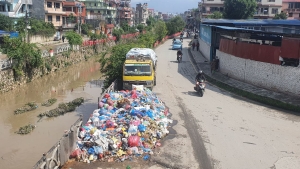 In a democratic Nepal, waste delivery has to be escorted by security personnel