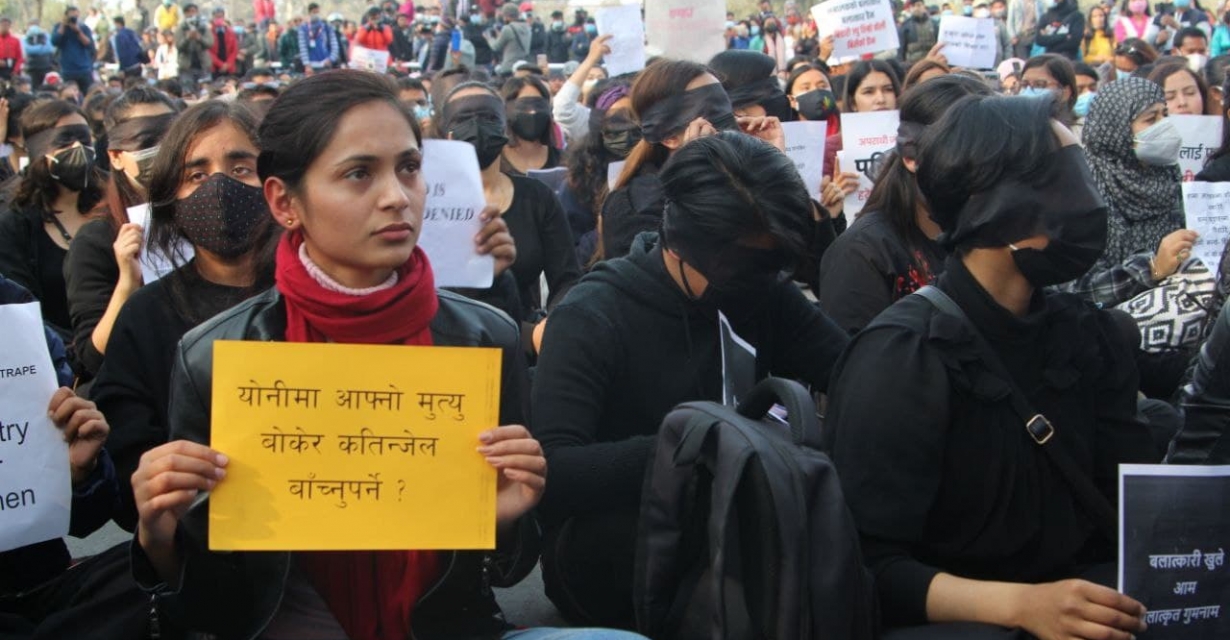 How safe are women and girls around people they know?
Read Time: 5 minutes

A four-year-old girl studying in Grade I was raped at her school in Gorkha on February 3, 2020. Police arrested a 13-year-old boy of the same school on charge of raping the child in the school’s girls’ toilet.

On February 13, 2020, as many as 19 girl students, all below 13 years of age, of Shree Narayan Basic School, Lalitpur handed a written complaint to the school’s principal stating their social studies teacher was sexually harassing them by ‘caressing their back, touching their breasts and private parts, and acting obscenely’.

On September 28, 2020, a 35-year-old man was arrested from Tripura Sundari Rural Municipality on the basis of a complaint that he repeatedly raped his 14-year-old daughter.

These are only a few cases where girls were molested and raped at their schools and homes – both places which are supposed to be the safest for women and girls.

According to a study by Save the Children, one in every four girls and one in every six boys are sexually abused. The study also shows that children of age 11 to 14 remain most vulnerable to and confused about sexual abuse.

“We try our best to be a friend to students so that they can tell us about their problems. I, myself, encourage my students to talk about their problems, be it regarding education or personal matter. Not only at schools, but there are times when students get abused sexually and physically in their homes,” said Kalpana Rimal, a secondary school teacher.

According to the latest data by Nepal Police, as many as 2,144 cases of rape were registered in the last fiscal year. Similarly, 60 percent of rape victims were below the age of 15, especially between 11 and 15.

Authorities and rights activists repeatedly point out the importance of family members and close individuals in supporting abuse survivors with filing police complaint and fighting against culprit(s).

“Many children below the age of 16 are raped by someone close to them, such as a family member or a relative. But the survivors hardly receive support from other members of their family and friends in pursuing the matter legally. Many family members also try to ‘settle’ such cases for fear of reputation damage,” said Meera Dhungana, president at Forum for Women, Law and Development.

According to Senior Superintendent of Police (SSP) Kuber Kadayat, spokesperson for Nepal Police, generating awareness in the community and schools is crucial for any case of sexual violence to be registered.

“If children are not aware of what sexual abuse constitutes, they will remain silent and go on to suffer at the hands of perpetrators. Nepal Police has started the ‘Community-Police Partnership Campaign’ with the objective to curb crimes against women and children. Through the awareness campaign, we request participants to report any criminal incident perpetrated against them and encourage others to do the same,” added Kadayat.

Moreover, Nepal’s school curriculum includes sex education only in the secondary level, which is from Grade VIII. Though the course includes general information about reproductive organs, lessons related to consent and about good touch and bad touch are absent.

WHAT CAN I DO?

Parents should be attentive towards their children’s needs and emotions. If a child doesn’t want to be around any person or doesn’t like someone without any reason, be it a relative or a family friend, we should try to talk to our child and provide them with a safe space where they can say things without the fear of being judged.

24-year-old Pragati Sunuwar, a law student, says that parents need to trust their children and work a little harder to earn their children’s trust.

“When I was 11-years-old, there was an uncle who used to come to our house in Kathmandu from his village because he had some official works in the city. Both my parents used to work, so my English teacher would drop me home after school. Taking advantage of my parent’s absence, the uncle used to touch me inappropriately. Though I told my mom that I didn’t like the way he touched me, she told me that the man was just being nice and was a good person,” recalls Sunuwar.

“If only my mom had trusted me and tried to figure out what was happening, maybe that uncle would have faced consequences. I don’t think I was the only one he touched inappropriately,” she shudders with fear.

Meanwhile, school authorities are notorious for trying to sweep students’ complaints of sexual harassment under the rug to save face. Unless school authorities take a stand against child abuse, conduct thorough background check of teachers before hiring them, conduct timely reassessment of teachers’ activities, and include lessons regarding consent as well as types of touches, children simply cannot muster the courage to identify and report their abuser.

Similarly, if you are someone who is close to a child in any way, you need to talk to them as a friend and notice any changes in their behaviour when you ask them if they are feeling troubled by anything or anyone.