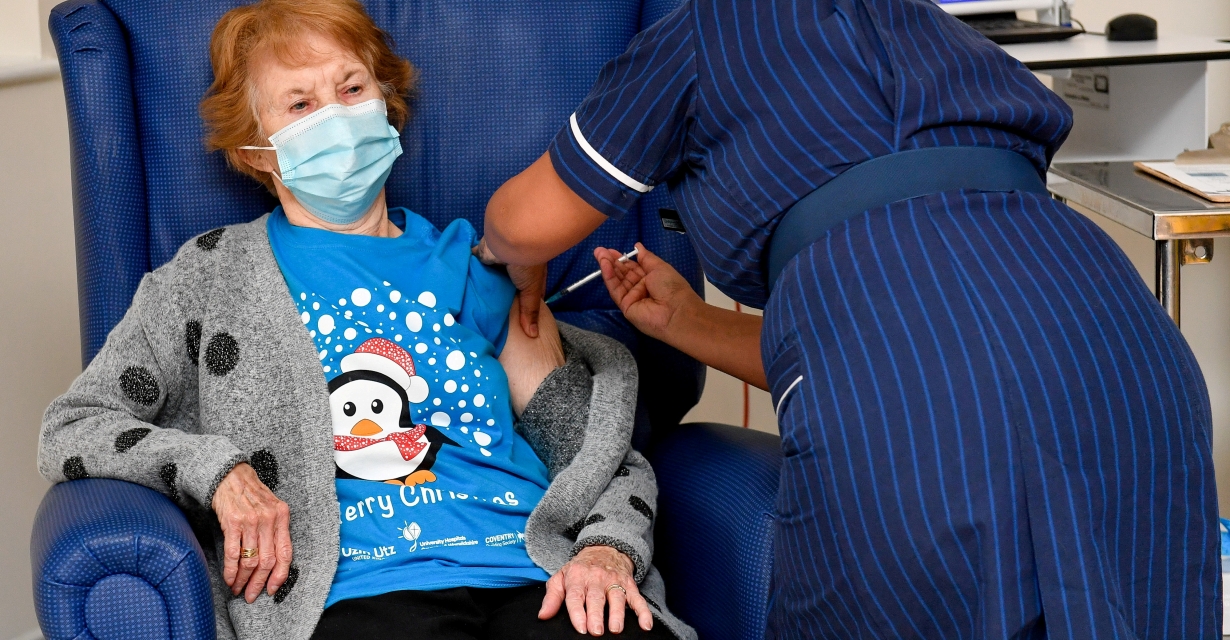 Margaret Keenan, 90, is the first patient in Britain to receive the Pfizer/BioNtech COVID-19 vaccine at University Hospital, administered by nurse May Parsons, at the start of the largest ever immunization program in British history, in Coventry. Britain is the first country in the world to start vaccinating people with the Pfizer/BioNTech vaccine. Jacob King/Pool
‘Go for it,’ says grandmother who got world’s first Pfizer COVID vaccine in Britain
Read Time: 4 minutes

Margaret Keenan, the 90-year-old grandmother who became the first person in the world to receive the Pfizer COVID-19 vaccine outside of a trial in Britain on Tuesday, has a message for others: “go for it” to beat the devastating disease.

An early riser, Keenan, from Northern Ireland, received the Pfizer-BioNTech shot at her local hospital in Coventry, central England, at 0631 GMT, a week before she turns 91.

A video showed her being wheeled out of the ward while nursing staff clad in protective gear lined the corridor to applaud and cheer, an echo of moving video clips released through the year when COVID-19 survivors left hospital.

“I say go for it, go for it because it’s free and it’s the best thing that has ever happened,” Keenan told reporters as cameras flashed and television reporters asked questions. 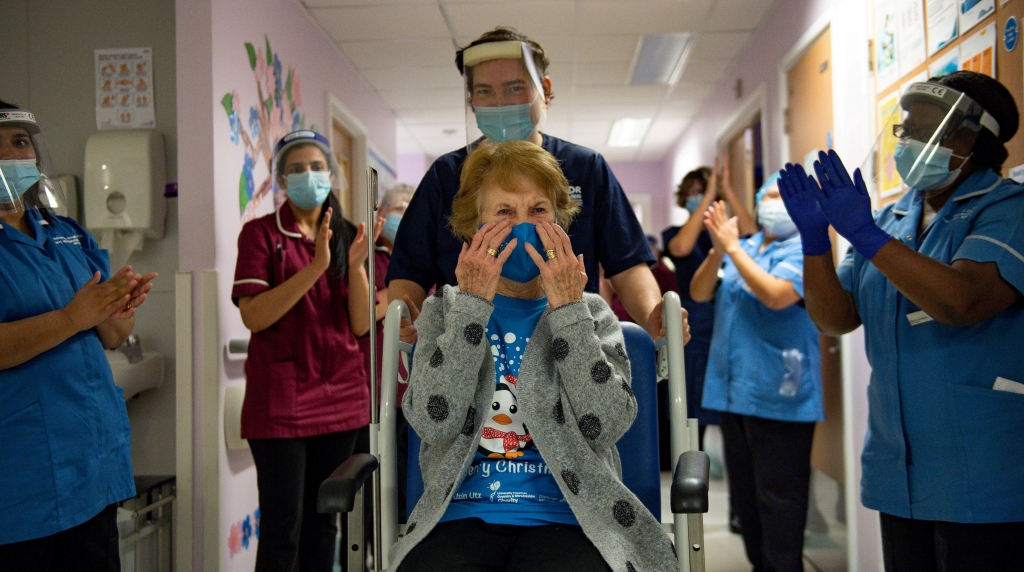 Margaret Keenan, 90, is applauded by staff as she returns to her ward after becoming the first person in Britain to receive the Pfizer/BioNTech COVID-19 vaccine at University Hospital, at the start of the largest ever immunisation programme in the British history, in Coventry, Britain December 8, 2020. Britain is the first country in the world to start vaccinating people with the Pfizer/BioNTech jab. Jacob King/Pool via REUTERS TPX IMAGES OF THE DAY

Known as Maggie to her friends, Keenan said she had stuck by the rules and spent most of the year on her own as the “devastating” pandemic took hold.

The vaccine means she can start to look forward to spending time with her family and friends again.

Britain is the first Western country to start immunising its population in what has been hailed as a turning point in the battle to defeat the disease. It is the worst-hit country in Europe with more than 61,000 deaths.

“I wasn’t nervous at all,” Keenan said, before discussing plans for her birthday.

Video footage showed the former jewellery shop assistant wearing a light blue mask, a grey cardigan and a blue T-shirt with a penguin in snow and the message “Merry Christmas”.

She received the shot in her left arm from nurse May Parsons, who has worked in Britain’s National Health Service (NHS) for 24 years.

“WE WILL BEAT THIS TOGETHER”

The mass inoculation will fuel hope that the world may be turning a corner in the fight against a pandemic that has crushed economies and killed more than 1.5 million.

Parsons said the last few months had been tough, but that there was now light at the end of the tunnel.

“I’m just glad that I’m able to play a part in this historic day,” said Parsons, originally from the Philippines.

An 86-year-old British woman who will also receive the shot on Tuesday was choked with emotion as she recounted on the radio how she had had to grieve for her husband alone after he died with the disease.

She is looking forward to going to the shops and taking the bus again.

Britain has ordered 40 million doses of the Pfizer/BioNTech shot. As each person requires two doses, that is enough to vaccinate 20 million people in the country of 67 million.

About 800,000 doses are expected to be available within the first week, with care home residents and carers, the over-80s and some health service workers the top priority to get them.

Keenan said she hadn’t made history before but was very proud to have played her part. For now, though, she said she planned to have a little rest. (REUTERS)