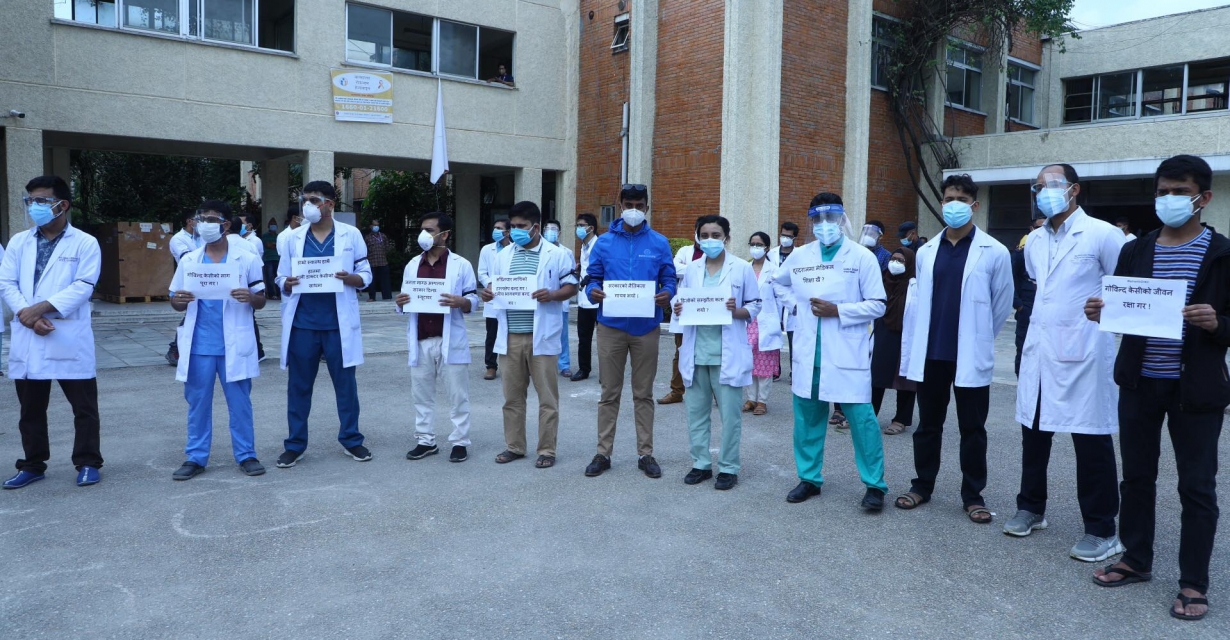 Healthcare workers from across the country staged a silent sit-in at Maitighar of Kathmandu on Sunday stating that the government had been lackluster in solving their problems while they were fighting the COVID-29 pandemic in the frontline.

As many as 26 trade unions and professional unions working in the health sector have formed a joint struggle committee and started their protest with an 18-point demand. They will reportedly continue the protest until the government addresses their demands.

Some demands of the agitating frontline health workers to tackle the COVID-19 pandemic include secure and safe work environment, disbursement of risk and incentive allowances, and implementation of the government’s commitments, among other things.

Stating that the government had repeatedly turned a deaf ear to their plights, frontline health workers said they were left with no option but to stage protests.

Nepal Joint Health Struggle Committee Coordinator Dr Lochan Karki said that the government had not only ignored the plights of frontline health workers but also the issues related to public health and life.

He added that despite reports of mutation and new findings related to COVID-19, Nepal government had not shown any interest in upgrading or updating safety protocols for frontline health workers.

Agitating health workers have also demanded the government to increase the number of ICUs, ventilators, and other medical equipment along with the range of COVID-19 tracing, testing, isolation, treatment; provide risk allowances to healthcare workers; provide easy communication and transportation expenses; and arrange quarantine, isolation and leave facilities as well as a separate COVID-19 dedicated hospital for infected healthcare workers.

Meanwhile, the Ministry of Health and Population on Friday held talks with the agitating Joint Health Struggle Committee. The Ministry has formed a three-member dialogue committee under the coordination of Dr Roshan Pokhrel, with Jageshwar Gautam and Damodar Regmi as members.

Likewise, Dr Karki said that he had received a letter from the Health Ministry for talks and would form a negotiating committee on Monday after holding internal discussions.