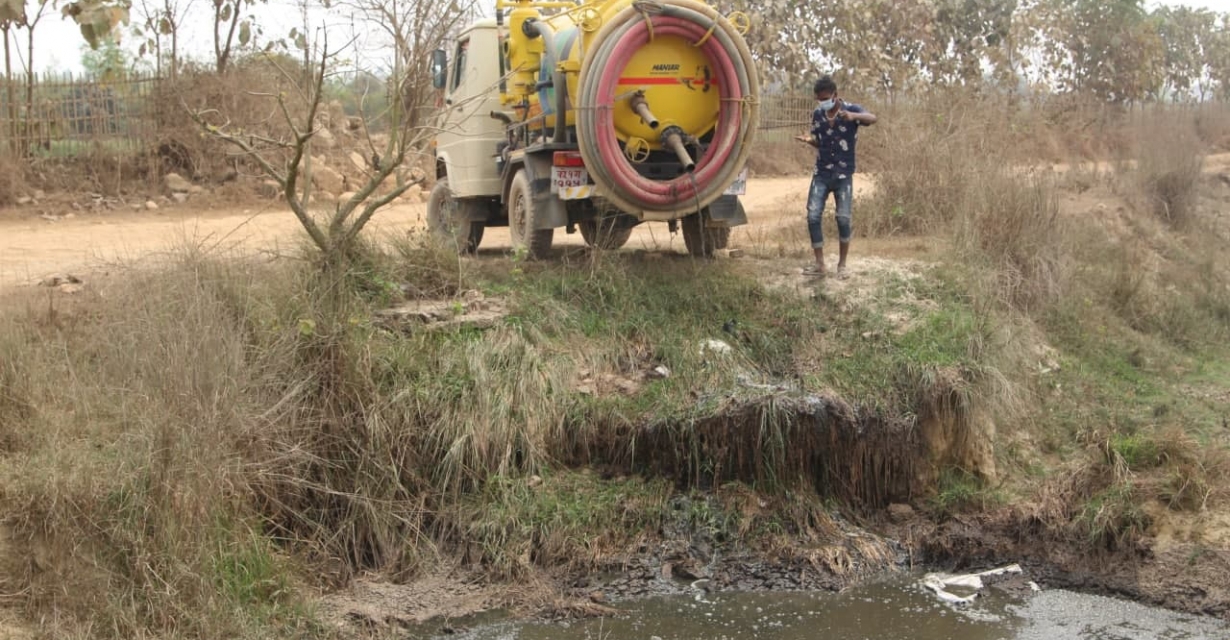 The Department of Water Supply and Sewerage (DWSS) claimed in 2018 that national sanitation coverage reached 98%. In response to a call for a united vision on Fecal Sludge Management, Nepal government published Total Sanitation Guidelines in 2017, which include FSM as an indicator.

Subsequently, an Institutional framework on FSM in urban areas of Nepal outlined roles and responsibilities of key institutions and provided guidelines for implementation of FSM services.

As part of Nepal’s commitment to the SDGs, it has been allocating around 2 to 2.59% of its total budget to WASH, but there is currently no specific allocation for FSM.

According to ‘FSM Landscape in South Asia: Synthesis of a Multi-country study’, 65% of urban residents, or 368 million people, have access to an improved latrine (14%), septic tank (44%) or sewer connected system (42%) in countries like Nepal.

“With the successful reduction of open defecation, there is vast number of people who now depend on on-site sanitation, meaning sanitation systems in which excreta and wastewater are collected and stored or treated on the plot where they are generated. However, it is estimated that only 9.3% of sewerage is treated,” the study shows.

This, however, is only relevant for urban and peri-urban households.

In Rupandehi, Ram Kumar Lodh built a toilet five years ago – during Nepal government’s drive to build one toilet each home. His family of five has been using the facility since. His toilet is connected to a septic tank – when asked about the frequency of his septage disposal – he says the tank hasn’t been full in five years.

In nearby Kapilavastu district, Hari Prasad (name changed) built a toilet around the same time with connection to a septic tank – sadly, his family does not use the facility.

In Dharan, most homes are connected to septic tanks – and trucks are called in to dispose the fecal waste. However, the fecal waste collected from homes is not treated and is rather dumped in the nearby jungle.

Septic waste being dumped in a local forest in Dharan.

In Mirchaiya too, most homes are connected to septic tanks – but like in Dharan, the fecal waste is taken far away from the residential area and dumped in the open.

In Lalitpur Municipality, owing to lack of treatment plant, most of the fecal waste is dumped into the local river.

Dumping of fecal waste in the open defeats the purpose building toilets to alleviate open defecation – and is now Nepal’s next big sanitation challenge.

Critics have often claimed that Nepal’s open defecation free status was rushed – and while meeting a deadline stakeholders forgot its importance.

According to Parvati Subba, HBCC officer in Lahan, government bodies are yet to catch up on the importance of educating people about the importance of toilets. Similarly, Devnath Sah, mayor of Golbazar Municipality in Siraha says many residents refuse to build toilets in their home because they believe defecating in their homes is an ominous task.

When people in the nooks and crannies of the country are landless or barely have space to build a one-room hut, constructing toilets could be a burdensome task. In Nepal, FSM is a sub-sector within the larger water and sanitation sector and coordination is a major challenge to which there are varying responses.

There are a number of frameworks which provide guidance for coordination between the national and municipal level stakeholders, but the role of Provincial government is still ambiguous.

Due to the lack of a sewerage network, many of Nepal’s residences are dependent upon septic tank trucks. The government is therefore focusing on building treatment plants for fecal waste.

The two pilot fecal sludge treatment plants in Jhapa district can be taken as model projects carried out by Nepal Government towards Fecal Sludge Management.

Similarly, Mahalaxmi Municipality in Lalitpur District too has a treatment plant which has been able to treat most of its waste.

Jitender Malik of Golbazar who is a sanitation worker, says, “Many times, stray cattle and animals are seen around the area where we dispose the fecal sludge. If there was better management, for example, if the area was fenced and had a treatment plant, I could work without fear of contamination.”

According to ex- UN Secretary – General Ban Ki-Moon, “Investment in sanitation is a down-payment on a sustainable future. Economists estimate that every dollar spent can bring a five-fold return.”

Urban sanitation challenge is growing daily in developing countries – with fecal sludge management being a major challenge. Untreated human waste, which has been dumped in the open can have severe public health and environmental consequences.

Concerns of it is growing – and as Nepal builds more toilets, it should prioritise Fecal Waste Management.