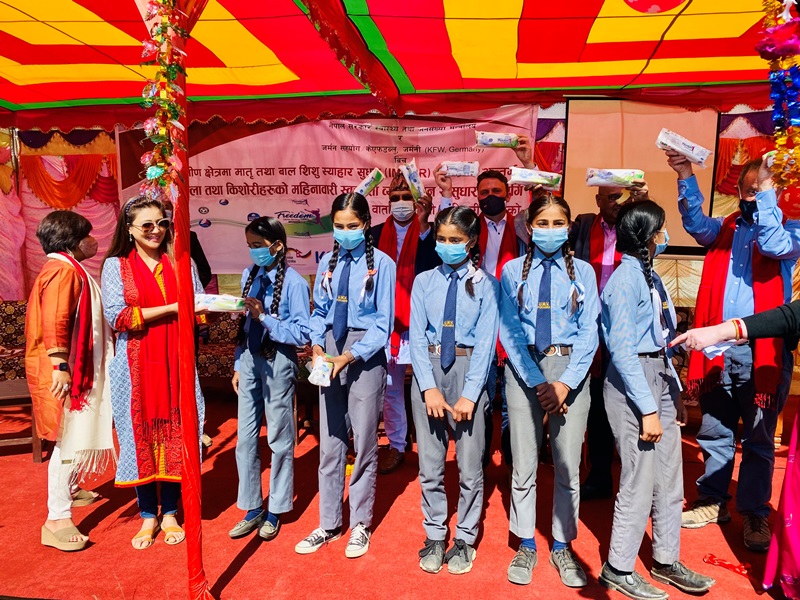 Nepal Contraceptive Retail Sales (CRS) company has launched eco-friendly sanitary pad under the brand name ‘Freedom’ in Dadeldhura. The first of its kind sanitary pad was introduced during a program at Ugratara Secondary School in Amargadhi-7, Dadeldhura this week.

Chief of Amargadhi Municipality Bisheshwar Prasad Ojha, Deputy Chief of the German Embassy Simon Henkel and Miss Nepal World 2015 Ivana Manandhar, among others, handed over the sanitary pads to a group of students at the program.

The eco-friendly sanitary pad was launched under the ICMCCR Maternal and Child Nutrition Improvement Program to manage and improve the monthly hygiene of women and adolescent girls in collaboration with the Ministry of Health and Population and German aid KFW in Baitadi, Doti and Bajhang including Dadeldhura in the far western region, informed Jiv Lal Pokharel, managing director of CRS.

Chief of Amargadhi Municipality Ojha said that biodegradable pads would play an important role in ending social discrimination against menstruating individuals within the Nepali society, while also being friendly to the environment.

Simon Henkel, Deputy Chief, congratulated CRS on launching the biodegradable pads in Dadeldhura. He said that he was impressed by the remarkable progress made by Nepal with free pads distribution at schools. Stating that Nepali menstruators still face stigma during their periods, he said it was important to educate all genders on the subject.

During the program, Miss Nepal World 2015 Ivana Manandhar said that menstruation should be taken as a gift. “It’s a natural process. It should not be discriminated against,” she said.

Pokhrel, Managing Director of Nepal CRS Company, said that the company would start marketing biodegradable pads in four districts of Nepal with the financial support of the German Development Bank. He informed that the pads will be marketed with the help of Dadeldhura Multi-Purpose Development Society, a partner organization implementing the program.