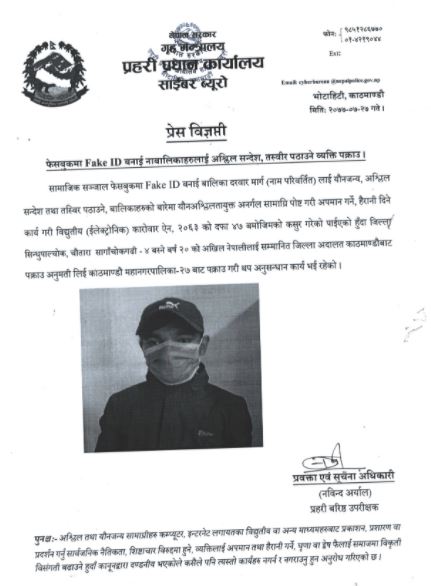 The Cyber Bureau of Nepal Police on Thursday arrested a 20-year-old boy for his involvement in virtual sexual harassment.

Akhil Nepali has been charged with creating a fake Facebook ID and sending sexually explicit and obscene messages as well as pictures to two 13-year-old girls and posting child pornography.

After monitoring the activities of Akhil’s fake Facebook ID and tracing his victims, the Bureau’s Digital Intelligence had sought permission from the Kathmandu District Court to arrest him.

According to the Bureau, Akhil had been virtually harassing the two girls for more than a year. A source said, “We have seen that the perpetrator had repeatedly requested the girls to send pornographic videos, photos and meet him.”

According to police, Akhil initially came to know about the girls through Facebook and later used various fake IDs on the social media platform to sexually exploit girls.

The Bureau is investigating whether he did so for personal sexual gratification or planned to sell the images and videos by engaging his victims in sexual activities.

A police source said, “Akhil has been sending child pornographic videos and threatening the girls. It was easier for the police to investigate further after the girls informed their parents about the abuse.”

The Bureau is investigating whether Akhil is also linked to an international group of child sex offenders.

Child sex offenders have been expanding their network globally through chat rooms in the dark web and sharing child pornography as well as videos for personal sexual gratification.

Bureau’s SSP Navinda Aryal said, “Investigations are also underway into whether such acts were carried out to sell photos, videos to child sex offenders.”

Incidents of child pornography and virtual sexual violence targeting teenagers have been on the rise in the recent days.

Prabin Dhakal alias Nitesh, 21, of Kageshwari Manohara Municipality-8, Kathmandu was arrested by the Cyber Bureau on October 15 after investigation revealed that Nitesh used Facebook Messenger to send child pornography to his friends and other children under the age of 18.

So far in the current fiscal year 2077/78, the cyber bureau of police has received 46 complaints of cyber crime, involving nine boys and 37 girls.
Most of these petitions mention cases of children being subjected to virtual sexual violence or being trapped by such unknown groups.

“There needs to be open conversation between parents and children about children’s activity on social media platforms,” said SSP Aryal adding, “This kind of communication helps children open up about their ordeals and to avoid virtual sexual violence.”