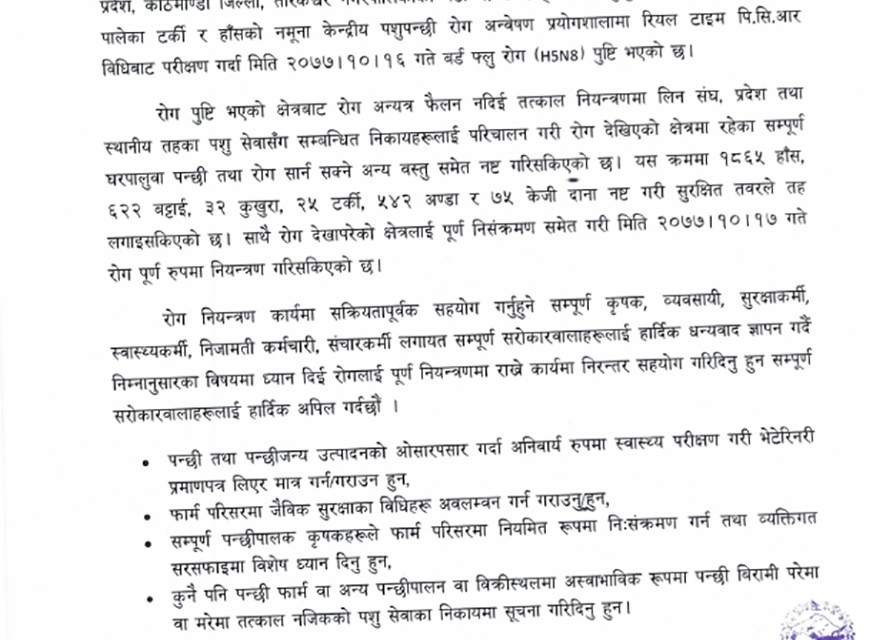 Bird flu has been found in birds reared at a farm in Futung, Tarkeshwor Municipality-7 of Kathmandu.

The government confirmed that bird flu (H5N8) had been detected in Kathmandu on Saturday.

According to the Ministry of Agriculture and Livestock Development, at least 1,865 ducks, 622 quails, 32 chickens, 25 turkeys, 542 eggs and 75 kg chicken fodder were destroyed after the virus was detected in the farm in order to prevent the spread of the disease to other areas.

According to the Department of Veterinary Services, bird flu was confirmed on Friday when samples of turkeys and ducks reared by local farmers in Futung area were tested at the Central Veterinary Disease Investigation Laboratory.

Similarly, the Department has stated that the area has been completely disinfected after destroying 542 eggs and 75 kg of animal feed.

Five years ago, poultry sector had collapsed when bird flu was found in a large number of broiler chickens. The Department says that even if the virus is not seen in broilers this time, high vigilance should be adopted.

The Department has issued a press release urging meat traders to get health check-up and veterinary certificates while distributing poultry and poultry products. It was also suggested to disinfect the farms and pay attention to personal hygiene.

The government has also requested poultry farmers to immediately inform the nearest animal service body if any bird falls ill or dies in any poultry farm or sales outlet.

The H5N8 virus had been reported in several states of India a month ago and Nepal government has been testing samples from farms to check the state of the virus in the country.