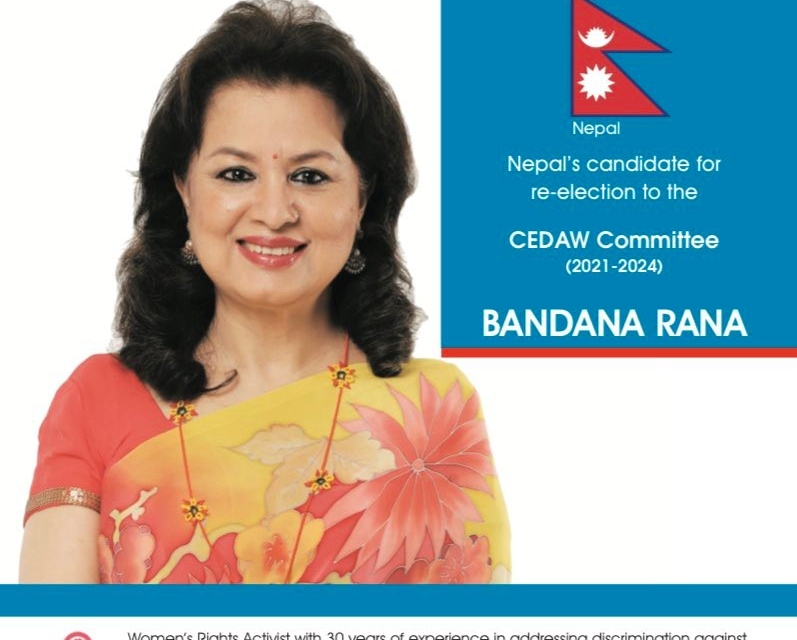 Nepal’s candidate Bandana Rana has been re-elected to the Committee on the Elimination of Discrimination Against Women (CEDAW) for the second term, in the elections held during the 21st Meeting of the States Parties to the Convention on Elimination of All Forms of Discrimination Against Women in New York on November 9, Permanent Mission of Nepal to the United Nations said in a press statement.

Rana obtained 137 votes, the third-highest among 19 candidates contesting the election. She was one of the eleven candidates, including experts from the Netherlands, Bahamas, Lithuania, Ghana, Australia, Mexico, Lebanon, France, Philippines and China, elected for the term of 2021-2024.

Currently the Vice-chair of the CEDAW Committee, Rana is the first Nepali national serving in the Committee.

She has over three-decade long experiences of working in the field of gender equality and women rights.

Following the elections, the Leader of Nepali delegation to the 21st Meeting of the States Parties to the Convention Ambassador Amrit Bahadur Rai stated that Rana’s re-election was a recognition of her proven expertise and experiences.

“This is also an acknowledgement by the international community of Nepal’s sincere efforts in implementing the Convention and its Optional Protocol as well as an appreciation of the achievements we have made in the promotion of women rights in particular and human rights in general,” he said.

Upon being re-elected, Bandana Rana expressed gratitude to the Government of Nepal and all States Parties for their support and cooperation while also pledging to continue working to the best of her ability and adding value to the work of the Committee.

The Convention on the Elimination of All Forms of Discrimination Against Women was adopted by the UN General Assembly in 1979 and came into force in 1981. The number of its States Parties today stands at 189.

Nepal became a State Party to the Convention in 1991, and also acceded to its Optional Protocol in 2007.

The CEDAW Committee is a UN Human Rights Treaty Body consisting of 23 independent experts elected by the States Parties to the Convention. The experts serve in their personal capacities.