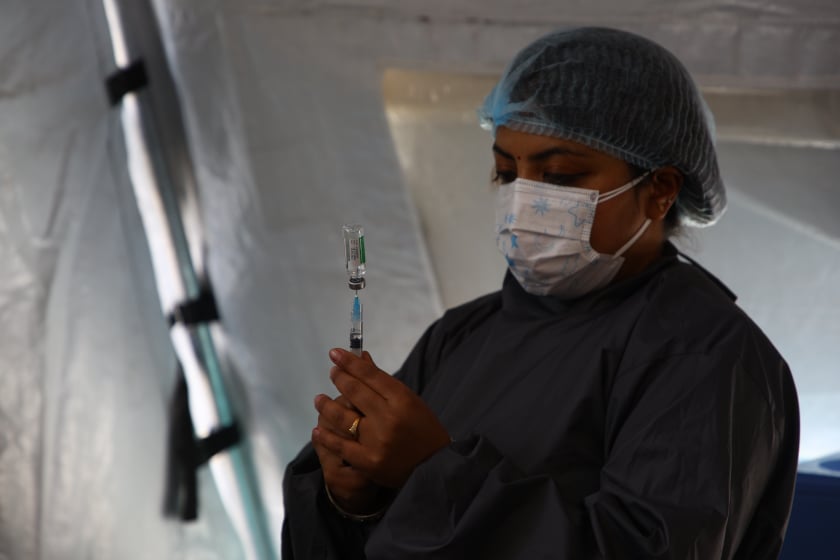 India’s delay in delivering additional one million doses of the vaccines bought by Nepal Government is said to have triggered the government to allow private sector to import the vaccines.

Though Nepal Government has already paid the Serum Institute of India (SII) for the agreed two million doses of vaccines, SSI said that it will not be able to supply the remaining one million doses and could eventually scrap the procurement deal.

Similarly, the government’s plan to buy an additional five million doses from SII is stalled for the time being whereas China’s pledge to provide 800,000 shots of the Sinopharm vaccine has also been delayed due to the Nepal Government’s inability to transport and lack of other arrangements.

Issuing a notice on Sunday, the Department of Drug Management has called on interested manufacturer companies as well as official importers or sellers to apply for the vaccine procurement permit within seven days along with the documents specified in the Code of Emergency Use of Drugs or Vaccines.

“Production price of the vaccines, transportation, storage, taxes of the concerned country, service charges should also be analyzed and the cost details should be submitted in such a way that the profit is maintained at a maximum of 10 percent,” the notice reads. 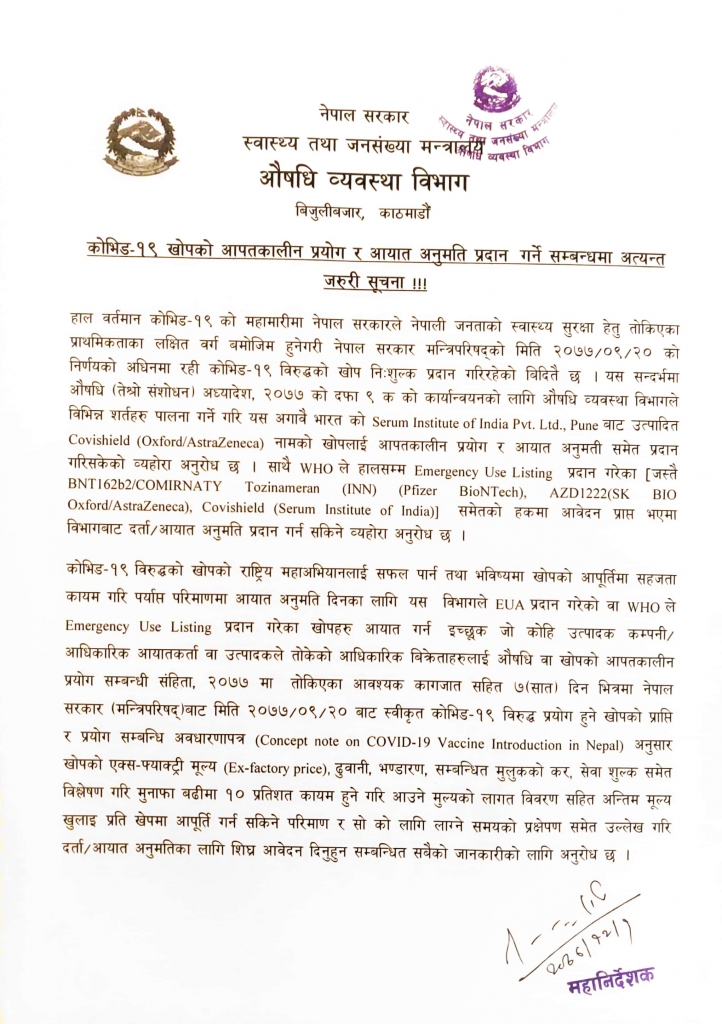 Meanwhile, private sector in Nepal has been hesitant stating that importing anti-COVID vaccines at the moment was difficult due to high global demand.

Later, an agreement was reached between Nepal and India’s SSI to buy two million doses of the vaccine at the rate of US $4 through the mediation of the Government of India.

As per the agreement, Nepal has already furnished 80 percent of the total payable amount in advance for the purchase of the vaccines. The government has paid about Rs 930 million for the vaccines.

SSI has sent a letter to Nepal’s Department of Drug Management stating that it cannot provide the remaining one million doses.

The lack of compliance from SSI despite an agreement has been translated as the result of straining relations between Nepal and India. However, Foreign Minister Pradip Gyawali claimed that the import of vaccines was not disrupted due to political reasons.

“We have already completed the diplomatic work. Demand for vaccines is high globally and SSI’s vaccines are cheap. So, clearly there is a gap between supply and demand,” he said.

As the government now has fewer doses of vaccines than expected earlier, it has been vaccinating only citizens over 65 years of age despite its pledge to inoculate people above 55 years.

“When allowing the import of vaccines, other conditions like health institutions using the vaccines, price of the vaccines, and recipients’ preferences shall be as specified by the Ministry of Health and Population,” the guideline reads.

The Cabinet, meanwhile, had decided to waive tax and other tariffs on vaccines and vaccine products that are imported and sold locally.

Shekhar Golchha, president of the Federation of Nepalese Chambers of Commerce and Industry (FNCCI), said that the government had finally heeded the private sectors’ long-standing demand to issue import license. “The private sector is capable of importing vaccines. The government’s decision is welcome,” he said.

“Those who can afford to buy the vaccines from private health institutions should be given the opportunity to get themselves vaccinated,” he said.

With the delay in vaccine import, Prime Minister KP Sharma Oli’s January declaration that ‘all Nepalis will be vaccinated within three months’ is certain to not materialize.