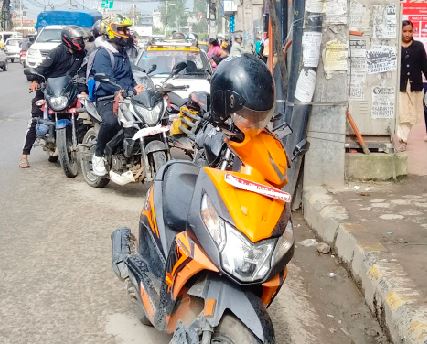 I was in Baneshwor area last month, waiting for a friend at a tea shop. The time was around 5 pm, and my friend as usual was late. With nothing much to do, I listened to the general conversation at the café.

This was right around Kathmandu Metropolitan City’s fierce crack down on illegal infrastructures and encroached parking spaces under the leadership of then recently elected independent Mayor Balendra Shah (Balen). The general view was that KMC’s move was valiant, necessary, and would improve the problem of parking related traffic congestion in the valley.

Meanwhile, outside on the narrow street – traffic snarled – most of it attributed to irresponsibly parked vehicles owned by the patrons in the cafe. So much for change, I wondered.

It is evident that after a successful campaign of demolishing illegal structures and freeing up parking spaces, the responsibility lies mostly with the public to determine its outcome.

Alfabeta complex, a commercial construction in Buddhanagar was visited by KMC officials and the illegal pharmacy was removed in an attempt to start utilizing the parking space as per its blueprint.

However, even after Alfabeta Complex has now opened their parking spaces, people are seen parking their vehicles right outside the building.

A car parked outside the Alfabeta Complex after the parking space is cleared for parking.

We have a habit of parking right in front of the business we have concerns with, and this process continues. When such individual negligent parking increases, so does traffic jams – caused due to such recklessness.

Meanwhile, addressing the problem with KMC, spokesperson Nabin Manandhar has informed that the metropolis is holding talks with Metropolitan Traffic Police Division (MTPD) to find a solution for the problem.

“We are discussing with traffic division to find a long-term solution for the problem while seeking a way to encourage people to park in designated areas. However, people need to support us by following the protocol too,” he said.

Manandhar also informed that the Kathmandu metropolis have cleared as many as 52 parking spaces inside the city with ample parking spaces so the unavailability of parking space in many areas should not be a problem.

Earlier people used to complain that Kathmandu does not have adequate parking spaces and vehicles were parked even on congested roads and alleys, causing inconvenience to passers-by.

Now, as the metropolis office has done their part in clearing out illegal spaces, people still continue to park on roadsides at their convenience without the fear of being reprimanded.

With the number of spaces being cleared for parking, a parking space should be within a 5-minutes walking distance. This ought to eliminate the issue of unmanaged and insufficient parking in major streets around the capital.

Another example is that four-wheeled vehicles have been banned from entering New Road in Kathmandu from September 24 to October 2.

Parking arrangements have been made in the Khula Manch area in order to reduce traffic congestion during the festival. Even then, we can observe people trying to figure out a loop hole to enter New Road in four-wheeler vehicles, via other possible routes.

While authorities work on regulating and reinforcing their policies, people too need to be aware of their civic responsibility – after all, change is a two way street. Public should make sincere efforts to recognize latest developments in their area, and at least abide by the rules and not find ways to circumvent the laws.

Previously, officials used to get a lot of stick for not managing parking spaces but now that they have, we have to learn to park at only designated spots. We have to acknowledge that our conscience, morality and discipline is the only solution to this problem and if we continue to park in front of our place of concern and business every time, the spaces cleared for parking will eventually become useless.