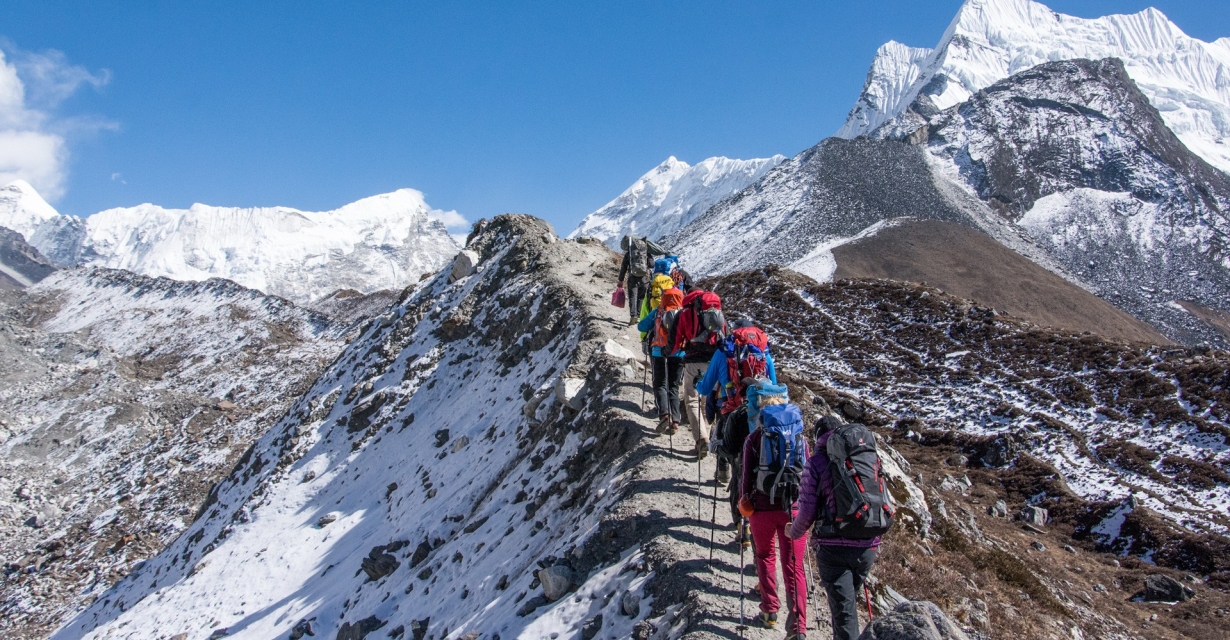 Over the 12 years that Baburam Giri has worked as a hotel cook in the village of Dhampus – a major tourist draw with its views of the towering Annapurna mountain range – winters have become less snowy.

“The snowfall we had five years ago was more than 2 feet deep – but we didn’t have significant snowfall after that,” lamented Giri, standing at his stove at the Hotel Yama Sakura.

With hotels across the world feeling the financial pain of travel restrictions to curb the coronavirus pandemic, Giri said his central Nepal community was relying mainly on Nepali tourists, who come every year drawn by the wintry weather.

But this year, the bare ground means few visitors.

“Many domestic and local tourists come to this area to play in the snow whenever there is snowfall,” Giri told the Thomson Reuters Foundation.

“But (now) the hotel is almost empty.”

From tourism to farming, industries based in Nepal’s mountains are hurting from a drop in income due to the lack of heavy snowfall in recent years – a phenomenon that scientists link to increasing temperatures.

“The temperature of Nepal is rising at the rate of 0.6 degrees Celsius (1.08 Fahrenheit) per decade,” said the regional programme manager.

A report published by Nepal’s Department of Hydrology and Meteorology in December predicted that the average temperature in the country this winter would be above normal and the average precipitation below normal.

For Budhhi Man Gurung, the owner of Hotel Yama Sakura, the combination of the changing climate and COVID-19 has led to an 80% drop in revenue compared to last year.

“It has become difficult for me to pay salaries to the staff,” he said.

There are no comprehensive studies on the economic impact of decreasing snowfall on Nepal’s tourism industry, but Dhananjay Regmi, CEO of the country’s tourism board, said in the long run the changing climate will undoubtedly lead to fewer visitors.

“Most of the tourists come to Nepal to see snow-filled mountains, but if these mountains turn into black hills that will ultimately affect tourism,” he said in a telephone interview.

The board had put together plans to promote snow-based tourism, such as skiing holidays, to bring more tourists to the region, Regmi explained.

“But the erratic snowfall seen in present days has made us question if that plan will succeed,” he added.

Tourism is not the only industry struggling with central Nepal’s lack of snowfall.

Shanta Bahadur Bishowkarma, a farmer in Dhampus, said just a few years ago he could sustain his household on the food he grew in his field.

Now, without significant snow, he is struggling to access sufficient water to grow enough maize, millet and vegetables to feed his family.

In the winter growing season, he used to depend on melting snow to water his crops. These days, he said, he sometimes has to resort to using drinking water.

The snow and cold also were good for keeping his crops free of pests, Bishowkarma explained, noting that the cold temperatures harmed many insects and diseases that could destroy his plants.

“From our ancestors’ days there has been the belief that there would be a bumper crop in a year that saw enough snowfall,” the farmer said.

But as warmer temperatures hit his fields, “now I have to buy food from outside”, he said.

And just as in other parts of the world that are heating up, warmer temperatures in Nepal’s mountains are attracting pests that once found them too cold.

The warming weather is also making it harder for Nepal’s mountain farmers to grow traditional crops that usually thrive in colder climates, such as apples.

“Even livestock are affected, as the lack of snowfall … causes a moisture deficit in winter and grasses they feed on cannot grow properly,” he said.

“The mountainous districts are already struggling with food insecurity and these things make the problem more serious.”

Climate researchers warn that snowy winters will become rarer in Nepal over the coming decades.

An assessment of the Hindu Kush-Himalaya region published by ICIMOD in 2019 predicted a 50%-60% decline in snowfall in the Ganges basin, which covers part of Nepal, by 2071-2100.

Research shows “unusually large” temperature hikes in high-elevation areas of the region, the report noted, adding that “the warming is estimated to be nearly two to three times the global average.”

Sushil Raj Poudel, president of the Trekking Agencies Association of Nepal’s western region association, said group members can no longer rely on the tourism boom they always used to see a few days after every heavy snow.

“Seeing no snowfall at this time of year in Nepal is a very strange thing,” he said.

“Climate change is something that I heard was happening in other countries, but now we are experiencing it in front of our eyes.”