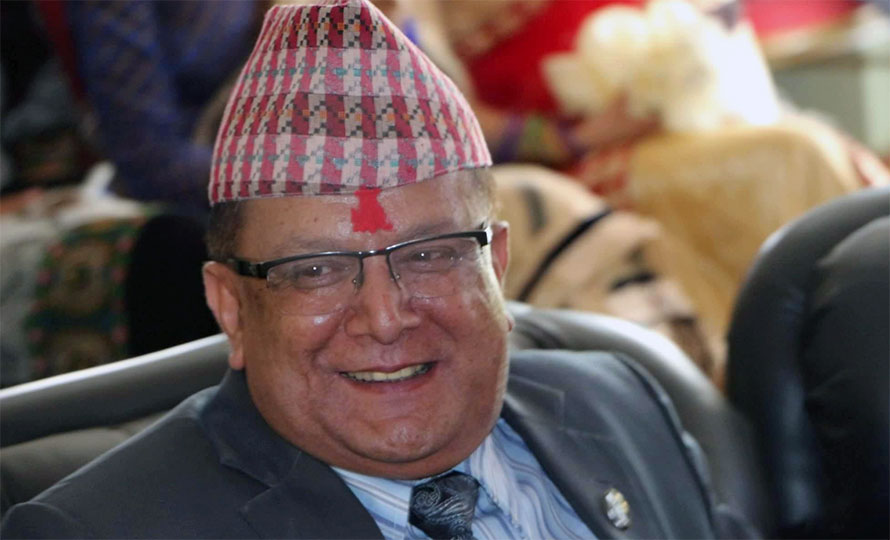 Upendra Koirala, the father-in-law of Deputy Prime Minister and Defense Minister Ishwar Pokharel’s son, has been sworn in as the new Director of Rastriya Banijya Bank. Koirala was sworn in on Wednesday, 40 days after he was appointed a member of the board of directors by the Ministry of Finance.

Joint Secretary at the Ministry of Finance Dhaniram Sharma, who is currently chairing the board of directors, administered the oath of office to Koirala. Former Finance Minister Yubaraj Khatiwada had appointed Koirala as a member of the board of directors with the aim of appointing him as the Bank’s chair later.

As Koirala is a controversial figure mired in corruption allegations, his appointment as the chair of the state-owned bank and the country’s largest financial institution was strongly opposed by economists as well as civil society.

The Finance Ministry had appointed Koirala as the board member on August 23 through a ministerial meeting while the Bank received the letter of the decision on August 24. Though the first meeting of the Bank’s board of directors decided to elect Koirala as its chairman in the next meeting scheduled for August 26, the meeting did not take place amid charges of nepotism and widespread backlash.

After then finance minister Khatiwada’s tenure expired, Prime Minister KP Sharma has taken the ministry’s responsibility without appointing a new minister. It is reported that Koirala was sworn in on Wednesday after getting green signal from the Prime Minister’s Office regarding his appointment as the Bank’s chair through the next meeting.

At present, the post of chairperson at the Bank is vacant after former chairman Nirmala Hari Adhikari was transferred to the revenue board and the Ministry of Finance is all set to appoint Koirala in the post.

Sources claim that Koirala’s appointed had been postponed earlier amid charges of nepotism. “Now that the backlash has died and people have been distracted with other issues, the government is all set to appoint Koirala as the Bank’s new chairman,” said an official of the Bank seeking anonymity.

Koirala used to be a college teacher before he became general manager of Nepal Food Corporation in the mid-1990s. He has served consecutively as campus chief of Mahendra Morang Campus and of the Post-Graduate Campus in Biratnagar, executive chairperson of Nepal Oil Corporation (NOC), deputy chairperson of Higher Secondary Education Board, vice-chancellor of Mid-Western University, all his tenures scrutinized for his alleged involvement in corruption and embezzlement.