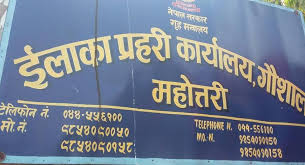 Two policemen involved in the death of a man after gunshots was fired by security forces in Bardibas to disperse a protest against the rape and subsequent murder of a girl have been transferred to the Mahottari district office.

Deputy Inspector of Police Birendra Singh and Police Constable Phulgen Mandal deployed at the Area Police Office, Bardibas have been transferred to the district.

After the locals protested and burned the house of accused Arun Sah for the murder of six-year-old Gulab Khatun on October 23, police had fired gunshots to disperse the crowd. A local, Sanjay Neupane, succumbed to the bullet injury while receiving treatment in Kathmandu and two others were injured during the gunfire.

Mahottari Police Chief SP Tika KC informed that the police officers were transferred to the district office in order to understand the matter and investigate whether there was negligence from police side.

Meanwhile, the committee formed by the Ministry of Home Affairs (MoHA) to investigate the murder of Gulab Khatun and the death of Sanjay Neupane have reached Mahottari on Tuesday.

The committee is led by Deputy Secretary of MoHA, Rudra Pandit, while the members include SP Abhinay Singh of Dhanusha Investigation Office and SP Krishna Prasai of Janakpurdham Police Office.