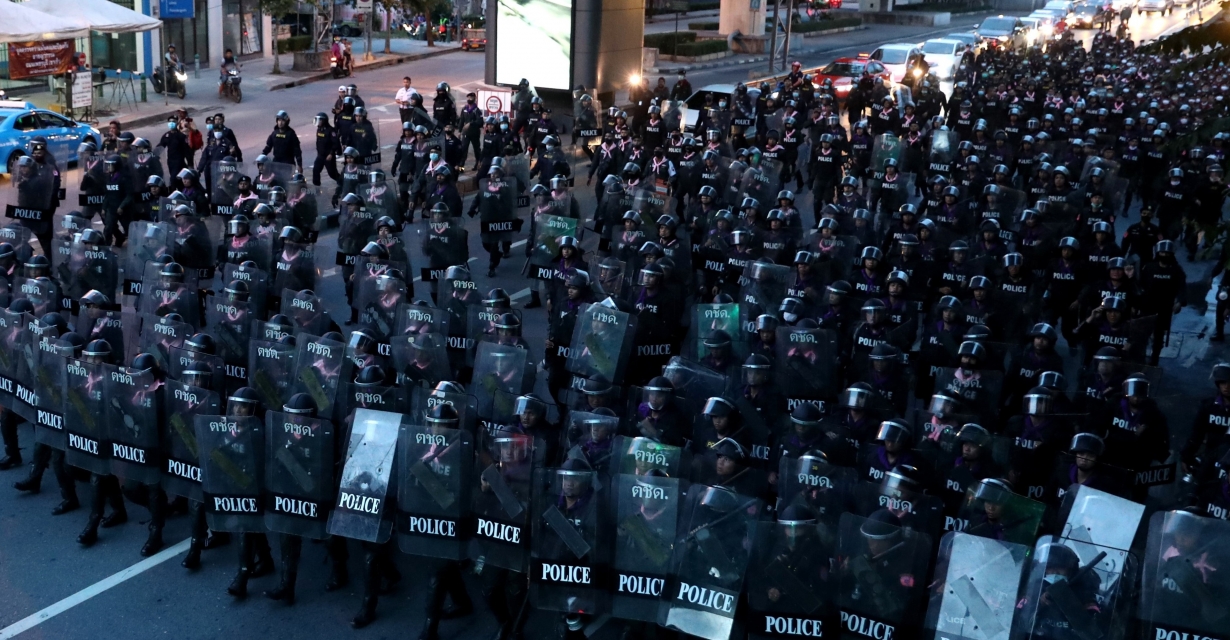 Riot police take up positions after a clash with anti-government protesters during a protest on the 47th anniversary of the 1973 student uprising, in Bangkok, Thailand October 15, 2020. REUTERS/Athit Perawongmetha
Thailand bans protests as challenge to establishment escalates
Read Time: 3 minutes

BANGKOK, Oct 15 (Reuters) – Thailand’s government banned protests and the publication of sensitive news on Thursday in the face of escalating protests that have targeted King Maha Vajiralongkorn as well as Prime Minister Prayuth Chan’ocha, a former junta leader.

Within 30 minutes of an emergency decree taking effect at 4 a.m. (2100 GMT), riot police advanced on protesters camped outside Prayuth’s office to demand his removal and a new constitution.

Police said they had arrested about 20 people who refused to cooperate, including two of the protest leaders who have been most vocal in criticing the monarchy.

To justify emergency measures that include a ban on gatherings of five or more people, the government cited the obstruction of a royal motorcade as well as growing disorder, economic damage and the risk of spreading coronavirus.

“It is extremely necessary to introduce an urgent measure to end this situation effectively and promptly to maintain peace and order,” the decree said.

The latest demonstration brought out tens of thousands of protesters on Wednesday. They marched to Government House and vowed to stay put until Prayuth left. Most left overnight. The few who tried to resist the police advance behind makeshift barricades were quickly cleared.

“We haven’t been able to restore a true democracy yet,” said 54-year-old Sun Pathong, a veteran of a decade of anti-estbalishment protests and counter protests before Prayuth took power in a 2014 coup.

“I’ll be back. We have to continue the fight even if we risk our lives.”

Student leader Panusaya “Rung” Sithijirawattanakul said protesters would go ahead with a protest planned for 4 p.m., but police spokesman Kissana Phathanacharoen told reporters the planned protest was banned under the new measures.

Police said they had arrested protest leaders Parit “Penguin” Chirawat and rights lawyer Arnon Nampa. Thai Lawyers for Human Rights said its earlier statement that Panupong Jadnok had also been arrested was incorrect. Twenty other protesters are still being held after a demonstration on Tuesday.

The protest movement aims to remove Prayuth, saying he manipulated an election last year to keep hold of power. He says the election was fair.

Those marching on the streets also want a new constitution and have called for a reduction in the powers of the king.

Protesters shouted at the king’s motorcade in Bangkok on Tuesday after the arrest of 21 protesters. On Wednesday, some protesters slowed a convoy carrying Queen Suthida, giving the three-finger salute and chanted “get out” at police protecting the vehicle.