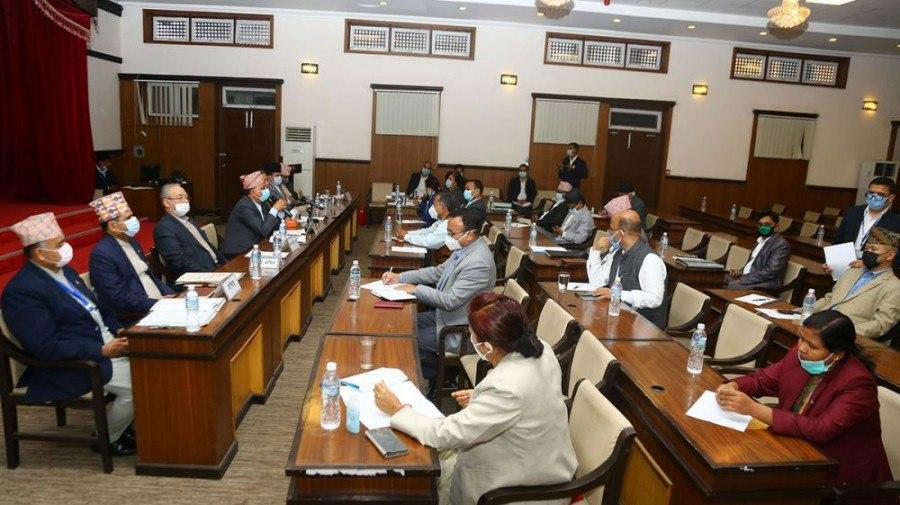 The State Affairs and Good Governance Committee has passed the Constitution (amendment) Bill proposing to grant naturalised citizenship to foreign women married to Nepali men only after seven years.

The bill was opposed by the Nepali Congress and the Janata Samajwadi Party-Nepal (JSP-N) but the parliamentary panel endorsed the bill on the basis of majority on Sunday.

Nepali Congress (NC) lawmakers wrote a note of dissent against the majority members’ decision, saying that the ruling party NCP’s proposal to make foreign wives of Nepali men wait for seven years to obtain naturalised citizenship was in violation of the constitution.

While the interim constitution had specified that naturalised citizenship be issued as per the prevailing laws, the promulgated statute states the phrase ‘pursuant to federal law’ in regards to the granting naturalized citizenship to foreign women married to Nepali men.

NC lawmakers said that the ‘mention of pursuant to federal law’ did not alter substantial meaning of the words in the constitution.

They said the provision to grant naturalised citizenship to foreign women married to Nepali men immediately after marriage was retained in the Interim Constitution of Nepal-2007 as all parties had agreed on the issue.

Since JSP-N is yet to be officially recognised by the Election Commission, panel members Rajendra Mahato and Raj Kishor Yadav of Rastriya Janata Party Nepal (RJPN) and Rajendra Shrestha and Raj Kishor Yadav of the Samajwadi Party-Nepal (SP-N) wrote a note of dissent against the majority members’ decision. RJP-N and SP-N had merged in April to create JSP-N.

JSP-N leader said majority members’ proposal to grant matrimonial naturalisation only after seven years was unconstitutional as there was no such condition in the new constitution.

They added that the provision of the interim constitution that allowed foreign women married to Nepali men to obtain naturalised citizenship immediately after marriage was a consensus decision and that should be retained.

Co-chair of JSP-N Mahantha Thakur issued a press release as a leader of Rastriya Janata Party-Nepal saying if the provision was enacted into law, it could deprive foreign wives of Nepali men of economic opportunities and property rights and could also adversely impact cultural ties between Nepal and India.
“This proposal will adversely affect ties of kinship that exist between Nepal and India and millions of people could be affected by this,” Thakur said in his release.

Spokesperson for the Parliament Secretariat Rojnath Pandey said the bill was ready to be tabled in the House. “The bill may be tabled in the next meeting of the House of Representatives scheduled for Tuesday. If the speaker wants, it could be put to vote soon,” he said.