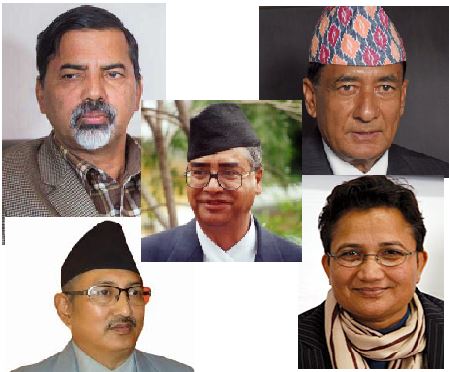 This is the fifth time Deuba has become Prime Minister of Nepal.

Here is a brief introduction of the newly inducted ministers:
Balkrishna Khand has been appointed as the Minister for Home Affairs. He has become a minister for the fourth time. He was the Minister of State for Education and Sports in 2009. In 2016, he was appointed the Minister of Defense. He is currently the chief whip of the Nepali Congress parliamentary party.

Khand, a resident of Tilottama-8, Rupandehi, has completed bachelor-levels. He started politics from the Nepal Students Union, a student organization of the Nepali Congress, in 1976. In 1987, he became the president of the Nepal Student Union. In 1997, he became the president of Nepal Tarun Dal. He became a member of the Congress Central Committee from 1999. Elected from Rupandehi-3 in 2007 and 2013, he was made a proportional lawmaker in the House of Representatives by the party in 2017.

CPN-Maoist leader Pampha Bhusal has been given the responsibility as Minister of Energy, Water Resources and Irrigation. She became the Minister for Women, Children and Social Welfare in 2007, Minister for Federal Affairs and General Administration in 2008 and Minister for Peace and Reconstruction in 2011.

Gyanendra Bahadur Karki of Deurali Gairigaun, Bhojpur is a loyal party member for Nepali Congress president Sher Bahadur Deuba. He has experience as the Minister of Water Resources and Minister of Finance.

He became the State Minister for Water Resources in the Girija Prasad Koirala government in 2006. Breaking the tradition of the Nepali Congress to hand over the responsibility of the Ministry of Finance only to the leader who understands economic issues, Sher Bahadur Deuba had made him the Minister for Finance in 2017. He studied up to post-graduate level and started politics after joining the Nepal Students Union in 1970.