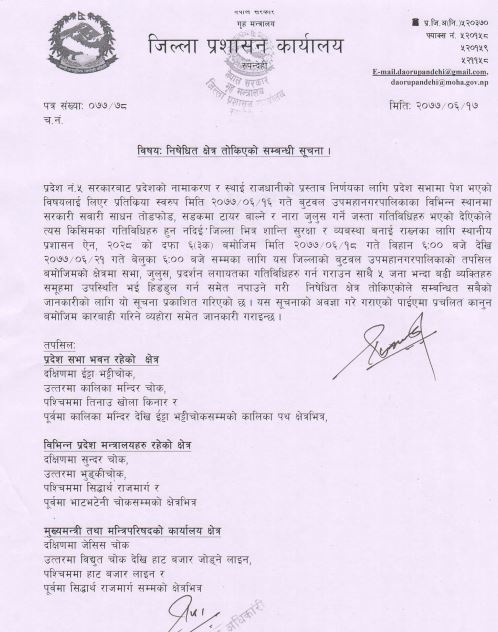 The dispute within the ruling Nepal Communist Party (NCP) has resurfaced, sparking violent pritests in Butwal, after the provincial government, on Friday, tabled a proposal to designate Bhalubang of Dang as the permanent capital for Province 5.

Following widespread condemnation and protests regarding the decision, 14 Provincial Assembly (PA) members of the ruling party wrote a note of dissent at a meeting of the ruling NCP held on Saturday to discuss the proposal.

They also demanded that they be allowed to put forth their views freely in the Provincial Assembly and that the party refrain from issuing any injunction to prevent them from airing their independent views.

After an agreement between the two chairpersons of the ruling party — KP Sharma Oli and Pushpa Kamal Dahal — the provincial government on Friday had tabled a proposal to declare Dang’s Bhalubang as the province’s permanent headquarters.

Following which, Provincial Minister for Internal Affairs and Law Kul Prasad KC on Friday registered a proposal at the Provincial Assembly to name Province 5 as Lumbini and Bhalubang as its capital.

Meanwhile, Nepali Congress (NC) has called a strike across Rupandehi today to protest the provincial government’s decision to declare Bhalubang as the province’s permanent capital. The party has also called on youths, students, industrialists and traders and various political party cadres to participate in the agitation.

NC has also declared that it will picket the provincial assembly building from 10:00 am on Monday morning.

Likewise, civil society leaders, people’s representatives and rights activists started a relay hunger strike in Taulihawa, the district headquarters of Kapilvastu, from 4 pm on Saturday. Local units in Rupandehi are also protesting against the decision.

Issuing a joint statement on Saturday evening, the people’s representatives of 16 local units in the district requested the government to withdraw the decision. NCP Butwal Municipal Committee also released a public statement and demanded that the decision be taken back.

Areas surrounding the Provincial Assembly building, various provincial ministries, office of the chief minister and council of ministers have been declared restricted zones effective from 6:00 am Sunday till 6:00 pm on Wednesday.