President Bidhya Devi Bhandari has called a special session of the House of Representatives at 1:00 pm on May 10 at the recommendation of the Council of Ministers.

President Bhandari has called the special session of the Lower House as Prime Minister KP Sharma Oli deems it necessary to seek a vote of confidence as per Article 100 (1) of the constitution, a press release issued by the Office of the President on Sunday reads. 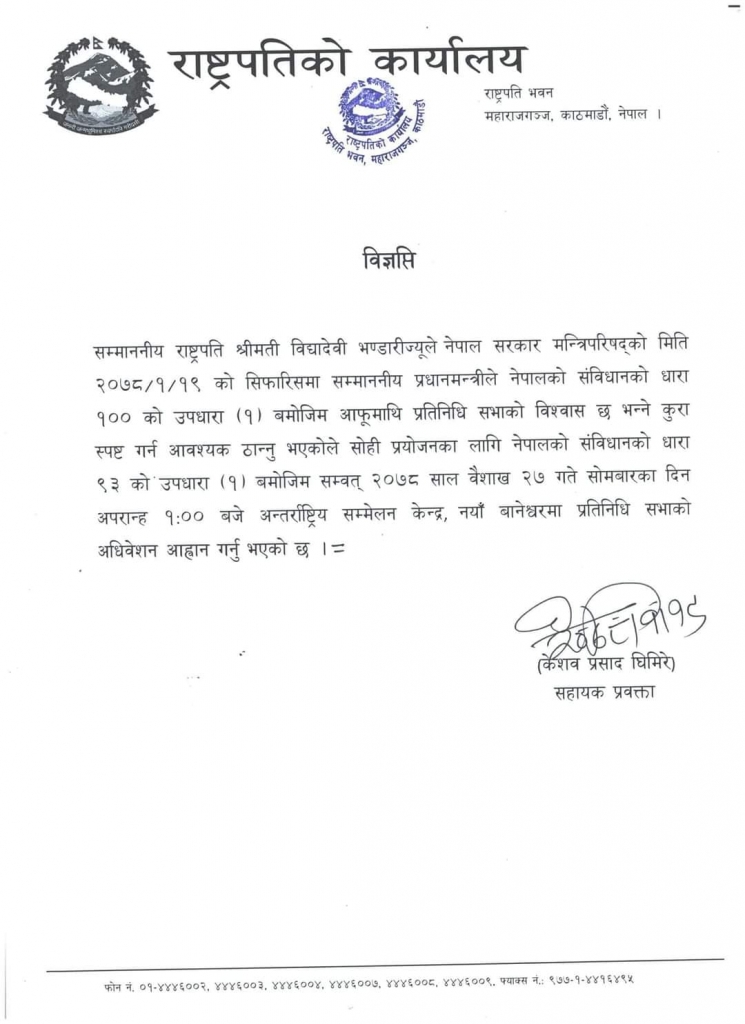 Earlier on Sunday, a Cabinet meeting recommended President Bhandari to summon the House session after Oli told the Council of Ministers that he would seek a vote of confidence in the House of Representatives.

According to UML Chief Whip Bishal Bhattarai, PM Oli had decided to seek a vote of confidence as the CPN-Maoist Centre had refrained from withdrawing its support to the government despite making repeated claims to do so.

The primary opposition party, Nepali Congress, has been holding talks with the CPN- Maoist Centre (MC) and the Janata Samajbadi Party-Nepal to file a no-trust motion against Oli and form a government under its leadership.

“The prime minister wants to make it clear to the nation where all lawmakers stand. He wants to lead a majority government and if he fails to garner vote of confidence then he is ready to quit,” Bhattarai said.

There are a total 275 members in the Lower House of the Federal Parliament. Since four members are currently suspended, Oli requires at least 136 votes of confidence to survive as the prime minister.

Oli must resign if he fails to get enough votes of confidence.

Article 100 (1) of the Constitution provisions that the Prime Minister may propose to seek vote of confidence from the House of Representatives at any time deemed necessary or appropriate to clarify that the House has confidence in him/her.

The incumbent government led by Oli is in accordance with Article 76 (2) of the Constitution. CPN-MC, which had supported the formation of the Oli-led government on February 15, 2018, has not withdrawn its support in spite of numerous political developments in the past year.

If Oli fails to get enough votes and resigns from the prime ministerial post, President Bhandari will call for the formation of a new government according to Article 76 (2) of the Constitution.

This article provisions that the President may appoint a member of the House of Representatives, who manages to obtain majority votes with the support of two or more parties, as the new prime minister.

UML parliamentary party deputy leader Subash Nemwang said that Prime Minister Oli had decided to seek a vote of confidence as he did not want another political deadlock.

According to Nepali Congress leader Radheshyam Adhikari, the Oli-led government was now certain to fall. “Oli’s government is currently standing with the support of the CPN-MC. Now, CPN-MC will not support Oli and as soon as that happens in the upcoming House session, the prime minister will fall from his high horse,” he said.