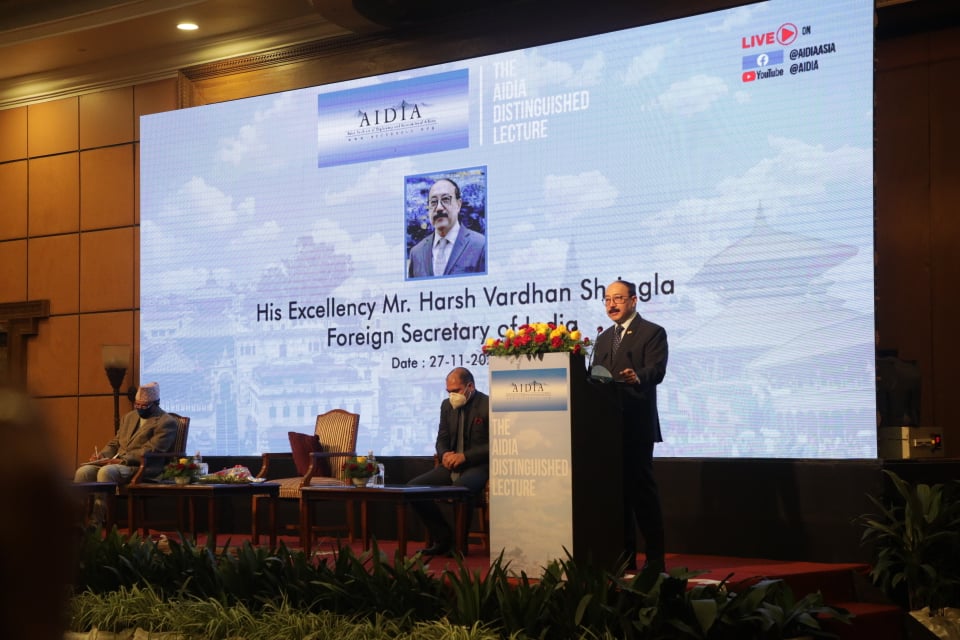 The Foreign Secretary of India, Harsh Vardhan Shringla, who arrived in Nepal on Thursday for a two-day official visit, today addressed issues related to Nepal-India bilateral cooperation at a lecture hosted by the Asian Institute of Diplomacy and International Affairs (AIDIA), a Kathmandu-based leading foreign policy think tank, at Soaltee Crown Plaza Hotel.

During his lecture, the foreign secretary, on his maiden visit to Nepal after taking the oath of office earlier this year, reiterated Nepal’s pivotal role in India’s neighborhood first policy. He laid stress on “perseverance and planning” to advance bilateral ties between two nations.

“Our bilateral calendar has never been busier,” he said indicating at continuous high-level visits by representatives of both the countries, including the prime ministers, over the past six years.

The relationship between both the neighboring nations has had its shares of highs and lows, but Shringla’s visit and his immaculate grasp of Nepali language have certainly paved the way for reconciliation and positivity.

A career diplomat, Shringla’s lecture consisted of encouragement, strength, and a future of hope for bilateral relations as well as economic sustenance. He stressed “on four pillars of development — cooperation, infrastructure, and enhanced education” and “a greater need for molding toward the utilization of technology and solving community-related problems which would make a high impact on the society as a whole”.

In his lecture, Shringla also highlighted the role of Indian pharmaceutical and health industries stating that India was known as the “generic pharmaceutical capital of the world” with an unblemished reputation. He also lauded India’s efforts in diligently handling the COVID-19 pandemic keeping in mind its population, which stands at over 1.2 billion.

The tremendous increase in medical facilities at home and India’s ability to promptly tackle a grave crisis while also supplying medications to over 150 nations during times of travel restrictions has shown its scale and resilience as an active and increasing global power.

Nepal, which is at the forefront of India’s neighborhood first policy, should actively try and tap on the enormous potential it has not only in terms of people-to-people relations but also, in the foreign secretary’s own words, in a similar “genetic profile”.

“Together we will recover from the pandemic and protect our people,” Shringla said while ensuring that India was willing to extend all possible help to Nepal with the use of latest technologies and tools for societal transformation.

He added that the Nepal’s potential in hydropower will be an “economic game-changer, and there is a need for research and forging more partnerships”.

Concluding his lecture in Nepali, which he speaks fluently, Shringla pointed out an important message that both sides should ponder upon, “Let us all be attentive that we are answerable to the current and future generations, and their aspirations should be our prime concern. India-Nepal relations should be based on mutual benefits.”

Also speaking at the program was former diplomat and foreign secretary Dr Madan Kumar Bhattarai, who laid stress on the foundations of Nepal-India bilateral ties and continued enhancement of cooperation between the two neighboring countries.