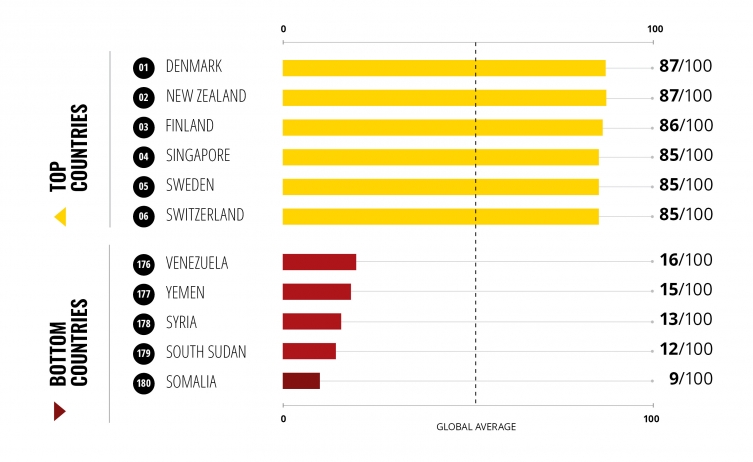 The 2019 Corruption Perceptions Index (CPI) issued today by Transparency International reveals that a majority of countries are showing little to no improvement in tackling corruption.

The CPI also shows that corruption is more pervasive in countries where big money can flow freely into electoral campaigns and where governments listen only to the voices of wealthy or well-connected individuals.

Meanwhile, Nepal improved its position on the index, jumping to 113th spot from 124. Kathmandu ranked Nepal 113 out of 180 countries with a score of 34, according to the CPI.

Nepal, however, still falls under the category of 20 most corrupt countries in the world.

The CPI ranks 180 countries and territories by their perceived levels of public sector corruption, drawing on 13 expert assessments and surveys of business executives. It uses a scale of zero (highly corrupt) to 100 (very clean).

“Governments must urgently address the corrupting role of big money in political party financing and the undue influence it exerts on our political systems,” said Delia Ferreira Rubio, Chair at Transparency International.

Similarly, Patricia Moreira, Managing Director at Transparency International said, “To have any chance of ending corruption and improving peoples’ lives, we must tackle the relationship between politics and big money. All citizens must be represented in decision-making.”