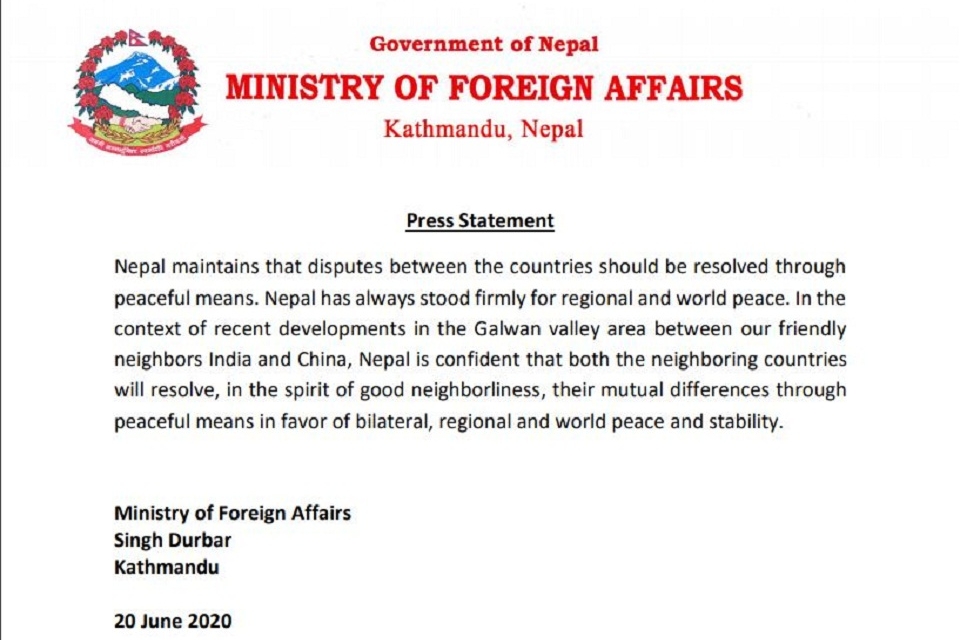 While the ongoing India-China border tension has already claimed the lives of 20 Indian army personnel, Nepal expressed confidence that friendly neighbors India and China will be able to resolve their differences through peaceful means in favor of bilateral, regional, and world peace as well as stability in view of the recent developments in the Galwan Valley area.

Nepal Ministry of Foreign Affairs (MoFA) released a press statement on Saturday saying, “Nepal maintains that disputes between the countries should be resolved through peaceful means. Nepal has always stood firmly for regional and world peace.”

“Nepal is confident that both the neighboring countries will resolve, in the spirit of good neighborliness, their mutual differences through peaceful means in favor of bilateral, regional and world peace and stability” the press statement read.

Nepal’s statement comes five days after 20 Indian soldiers were killed in a clash with Chinese troops in Galwan Valley along the India-China border on June 15.

India has accused China of killing its troops in its territory while China has denied the allegations.
Tension between the two countries continues to exist in the areas as both India and China are reportedly reinforcing their troops despite negotiations between the two sides at various levels to ease the ongoing tension.

On Friday, Indian Prime Minister Narendra Modi held an all-party meeting in New Delhi and reiterated his country’s efforts to safeguard territorial integrity and sovereignty, while China’s Ministry of Foreign Affairs said the Galwan Valley belongs to China and the recent military skirmishes took place due to what it said incursion on the part of the Indian military personnel.