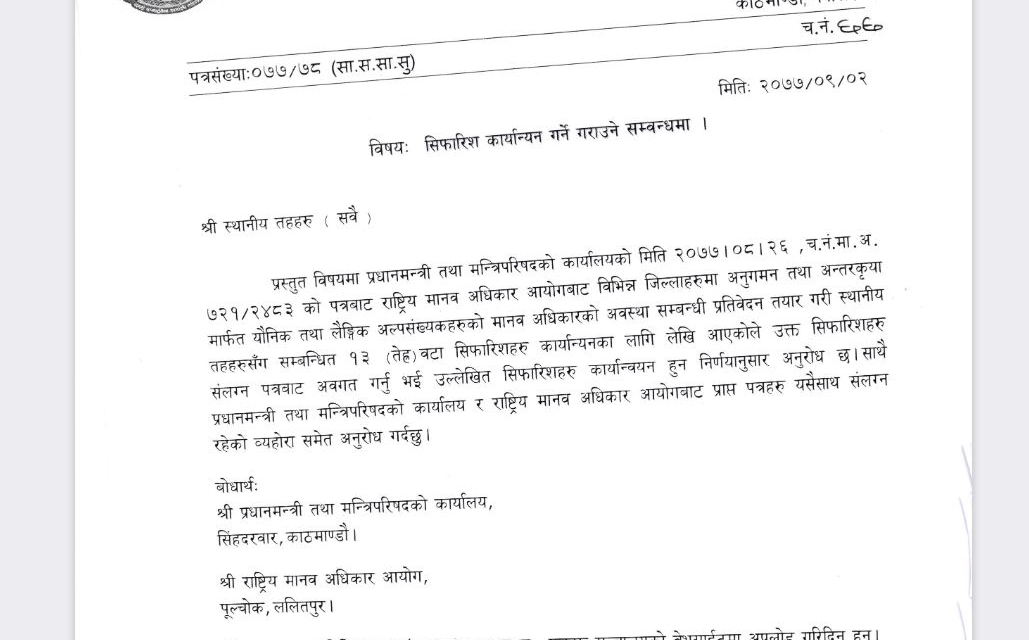 The Ministry of Federal Affairs and General Administration has issued a circular to all local levels directing them to implement the 13-point recommendation made by the National Human Rights Commission’s (NHRC) to ensure human rights of sexual and gender minorities.

NHRC’s recommendations in its study report ‘Human Rights Status of Sexual and Gender Minorities’ include ensuring LGBTI community’s rights to identity and dignity through enactment and implementation of legal provisions; easy access to citizenship certificate; implementing all recommendations and directions made by NHRC as well as Supreme Court’s orders in its full capacity.

The 13-point recommendation it made to the government requires local levels to organise training programmes for school teachers to encourage them to create LGBTI-friendly environment, conduct public awareness programmes related to discrimination against LGBTI people, provide counselling to their families, maintain their records, allocate budget for the protection of sexual and gender minorities, provide scholarship and educational materials to such persons for study, make the schools/colleges LGBTI-friendly and build a separate toilet for LGBTI students, among others.

The report, however, only includes lesbian, gay, bisexual, transgender and intersex (LGBTI) people as a vulnerable group which “continue to be the victims of human rights violations including deprivation of the right to identity and dignity.”

The report based on interaction with LGBTI people in Jhapa, Morang, Parsa, Rautahat, Mahottari, Kaski, Rupandehi, Kailali and Kathmandu districts over the period of six months has warned that sexual and gender minorities were most affected in the Madhes.

Of late, the LGBTQIA+ community in Nepal have been demanding that the citizenship certificate as well as other official documents, including the forthcoming national census, remove “others” as an alternative gender category.

The transgender community in particular wants the government to use “paralaingik” (transgender) instead of “tesro lingi” (third gender) for their gender identity in official documents.