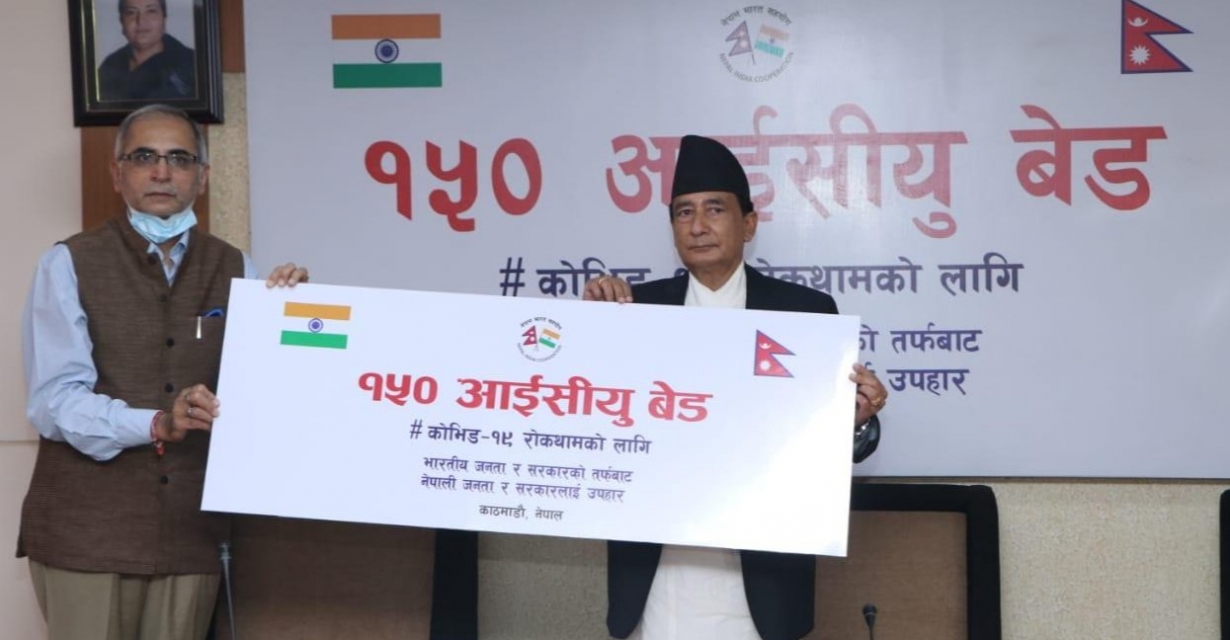 Ambassador of India to Nepal Vinay Mohan Kwatra handed over 150 ICU beds to Minister for Law, Justice and Parliamentary Affairs Gyanendra Bahadur Karki at a ceremony organized at the Ministry of Health and Population Sunday.

As per a statement issued by the Indian Embassy in Nepal, the ICU beds are a part of India’s commitment to COVID-19 cooperation with Nepal.

During the handing over ceremony, Indian Ambassador Kwatra reiterated India’s commitment to assist Nepal in comprehensively managing the pandemic, including through cooperation on the critical health infrastructure of the country.

Similarly, Minister Karki appreciated the gesture from Government of India and added that it was an important milestone in our fight against COVID-19 and it showed the incredible goodwill enjoyed by both the countries.

Nepal was one of the first countries to receive 1 million doses of Covishield vaccines from India in January 2021 as grant.

Besides this, the Indian Army has also supplied 100,000 doses of vaccines to the Nepal Army as grant and medical supplies including BIPAP machines, antigen kits, PPE, Masks, Ambulances and ICU beds.

Shortly after Deuba gained 165 votes of confidence in the 271-member House of Representatives, days after the Supreme Court reinstated the legislature that was dissolved in May, Modi took to twitter to congratulate his Nepali counterpart.

“Congratulations Prime Minister @DeubaSherbdr and best wishes for a successful tenure. I look forward to working with you to further enhance our unique partnership in all sectors, and strengthen our deep-rooted people-to-people ties,” Modi tweeted.

75-year-old Deuba, who has held the office four times before, faces the immediate task of procuring vaccines and controlling the spread of COVID-19, which the government says has infected 667,109 people and killed 9,550 so far.

Public health experts say an under-reporting of cases in the country means the figures could be higher.

Fewer than 4% of the country’s 30 million people have been fully vaccinated against COVID-19.

More than 1.3 million people, who have had a first dose of a vaccine, are awaiting a second as the government scrambles to procure shots.

“Combating COVID will be the first priority of the new government,” Deuba said in parliament.

The new government has pledged to vaccinate a third of its people in the next three months and every Nepali by next April.

It ruled that Oli, who had been in power for three years, had breached the constitution by dissolving parliament. However Deuba still needed to win the confidence vote, as per the constitution.

Deuba, head of the centrist Nepali Congress party, will head a coalition with former Maoist rebels and a party representing a minority community dominant on Nepal’s southern plains.

Oli, 69, says he had been unfairly removed by the court and has vowed to “go to the people” to explain his position.

Pradeep Gyawali, a senior official in Oli’s Communist Unified Marxist Leninist party, said the Oli government would be “remembered by the people for many good works it had done” while in power.