Landslides and floods triggered by incessant rainfall have killed six people across the country.

According to a statement issued by the Home Ministry on Wednesday evening, six people were killed in water-induced natural disasters. As many as 27 people have gone missing and 11 others have been injured in the recent floods and landslides, as per Home Ministry’s data.

So far, six people have been killed in Sindhupalchowk, two in Kaski, Palpa, Bajura and Doti.

One person has gone missing each in Bajura, Gorkha, Pyuthan and Arghakhanchi, seven in Jajarkot and 17 in Sindhupalchowk.

Similarly, the Home Ministry said 11 people were injured due to the landslides in Sindhupalchowk, six in Syangja, two each in Doti and Jumla.

Six people injured in a landslide in Sindhupalchowk have been rescued and are currently undergoing treatment at the Lalitpur-based B and B Hospital.

A total of 89 houses have been completely damaged and 26 partially damaged due to the floods and landslides. According to the Home Ministry, 46 people have been rescued in Sindhupalchowk and 50 in Dang.

Melamchi residents have moved to higher grounds with their belongings while army helicopters were rescuing those trapped in marooned houses.

Authorities urged people living along the Narayani River to remain alert as the river was flowing above the danger mark.

Last year, more than 400 people were killed due to monsoon-induced disasters and over 1,000 people were affected, as per government data.

After spectacular failure to adopt and implement proactive measures so as to prevent and minimize losses incurred due to floods and landslides every year, the National Disaster Risk Reduction and Management Executive Committee yesterday endorsed the Monsoon Preparedness and Response Plan-2021.

The Executive Committee, led by the Minister of Home Affairs, said the plan was introduced to minimize losses incurred due to the monsoon-induced disasters and make the rescue, rehabilitation and relief process more effective through coordinated efforts.

Ironically, Govinda Rijal, Chief of Division of Disaster Management, said that Wednesday’s meeting of the Committee dwelt on ways to minimize loss of lives and properties during the monsoon and other natural disasters.

Similarly, Minister of Home Affairs Khagaraj Adhikari assured that there would not be any resource crunch from his ministry in the rescue, relief and rehabilitation process of disaster survivors.

The meeting further identified disaster-prone areas and COVID-19 risk zones, while also reviewing the loss incurred due to recent monsoon-related disasters in Sindupalchowk and Manang districts.

Deputy Spokesperson for National Disaster Risk Reduction and Management Authority, Bednidhi Khanal said the minister had instructed all the line agencies to ensure that no one would have to lose their lives to natural disasters due to weakness on the part of government agencies.

It is important to note here that disaster victims in Nepal have no option but to await relief and rehabilitation from the government even years after their loss as justice eludes them due to political leaders’ inaction.

A grim example of the same is the displaced flood victims of Mahakali floods still awaiting compensation and resettlement eight years after the disaster.

The Mahakali floods swept away 56 homes, displaced over 2,500 households and killed at least 12 people in Darchula district in June 16, 2013.

According to him, the banks in Darchula are not willing to provide loans to the flood victims, as they don’t have any land or property.

The government has so far handed out Rs 35,000 to each flood-affected families in the name of relief and rehabilitation.

Let alone preparedness, the government has also utterly failed to fully adopt and implement the idea of resilience building.

As the government’s Disaster Risk Reduction plan fails to address the root causes of vulnerability threats and impacts, and the capacity of communities to withstand disasters decreases.

When a disaster affects any part of Nepal all levels of government scramble to deliver rescue work and relief distribution without sufficient coordination, despite the clear demarcation of responsibilities set out in the Disaster Risk Reduction Management Act 2017.

Rescue and rehabilitation efforts are largely focused on easily accessible areas, ideally ones where the response will receive media attention, leaving many of those worst affected to fend for themselves. 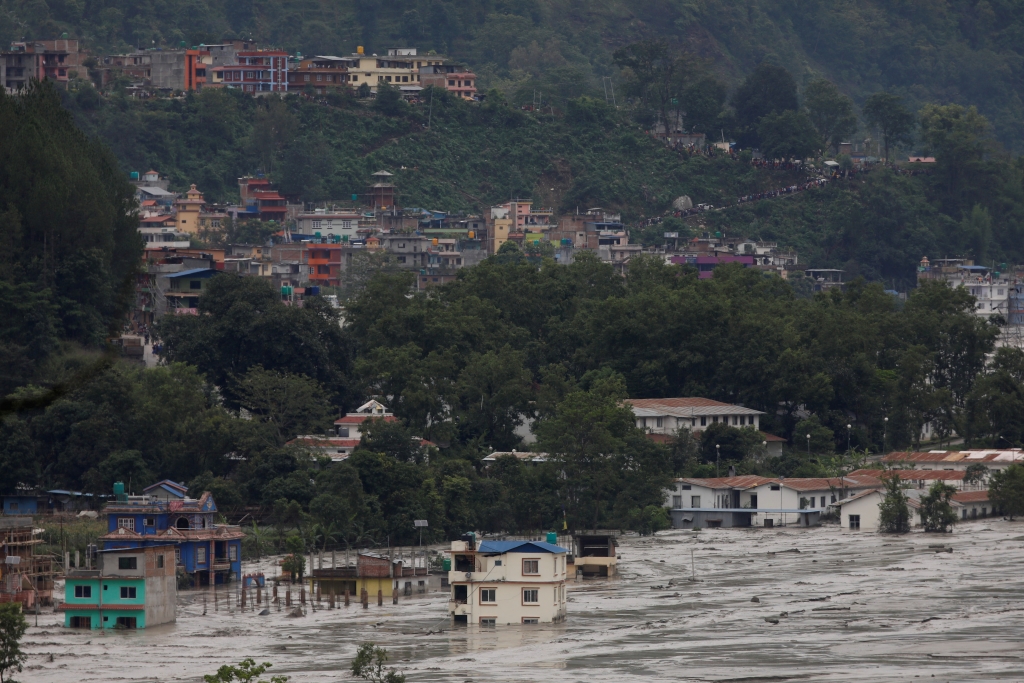 Locals gather their belongings as they move towards higher ground from the flood affected area in Sindhupalchok, Nepal, June 16, 2021. REUTERS/Navesh Chitrakar