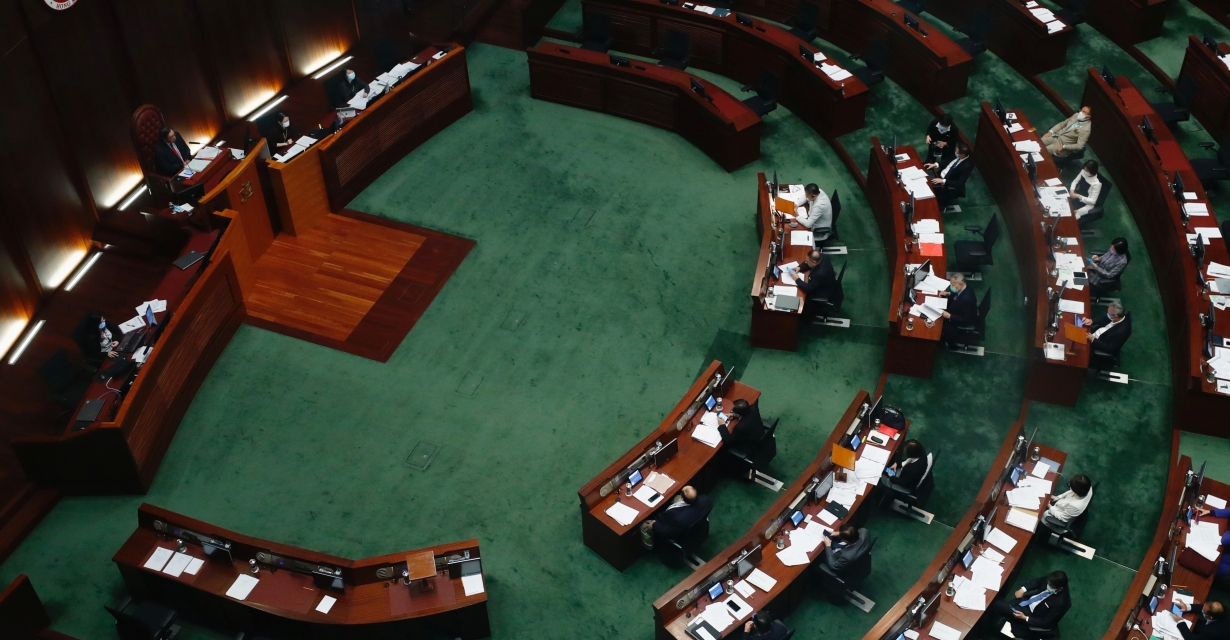 Empty seats are seen inside the chamber during council meeting after pan-democratic legislators resign in protest against the dismissal of four of their colleagues from the city assembly after Beijing passed a new resolution, in Hong Kong, China November 12, 2020. REUTERS/Tyrone Siu
HK opposition lawmakers to formally tender resignations in protest over oustings
Read Time: 4 minutes

HONG KONG, Nov 12 (Reuters) – Hong Kong opposition lawmakers, seen as representatives of moderate pro-democracy voices in the Chinese-ruled finance hub, are expected to formally tender their resignation on Thursday in protest against the dismissal of four of their colleagues.

Their dramatic departure will remove a key avenue for dissent in Hong Kong, where Beijing’s move to introduce national security legislation on June 30 and COVID-19 restrictions have quashed the pro-democracy protests which started last year.

The resignations are expected to be handed individually throughout the day at the Legislative Council, or Legco, in what is likely to be the swan song for the old guard of democrats.

The younger generation of pro-democracy supporters prefer a more confrontational approach, although it is unclear whether hardline activists would pass authorities’ patriotic scrutiny to be able to challenge in future elections.

“I never thought highly of the democrats, but now that they’ve all resigned we don’t even have anyone on our side with voting rights in Legco,” said 21-year-old student Jasmine Yuen on her way to classes.

“One year ago I was so angry and I was out there at the protests. But now I’m numb to these events. I lost my passion and fire. I don’t think there’s anything left to do.”

The Chinese parliament passed a resolution on Wednesday allowing Hong Kong authorities to expel legislators deemed a threat to national security or not holding allegiance to Hong Kong, without having to go through the courts.

Shortly after, the local government announced the disqualification of four assembly members who had previously been barred from running for re-election as authorities deemed their pledge of allegiance to Hong Kong was not sincere.

“This is yet another example of the Chinese Communist Party trampling on what is left of democracy in Hong Kong,” Chris Patten, the city’s last British governor, said in a statement.

“Once again, (President) Xi Jinping’s regime has demonstrated its total hostility to democratic accountability, and those who wish to stand up for it.”

“One Country, Two Systems is now merely a fig leaf covering for the CCP’s expanding one party dictatorship in Hong Kong,” O’Brien said.

Germany, holder of the European Union’s rotating presidency, and Australia have also condemned the oustings.

The resolution highlights Beijing’s rapid expansion of its influence in the city, which has been China’s most restive since it returned from British rule in 1997, as it pushes for loyalty from all levels of power in the Asian financial hub.

Chinese state media hailed the decision as a “long overdue” step towards “the return of peace and prosperity” in Hong Kong highlighting the need for the global financial hub to be “governed by patriots.”

“Those … who fancy that they can continue to act as pawns of external forces in the city’s legislature should wake up to the reality that the days when they could act with impunity are gone,” said the China Daily, the country’s official English language newspaper.

The fate of the opposition has been in doubt since the government, citing coronavirus risks, postponed September’s legislative elections by a year, in a move which critics have said was aimed at killing the pro-democracy camp’s momentum.

Earlier this month, police arrested eight other pro-democracy lawmakers over chaotic scuffles during a legislative meeting in May.

“The city is dying. It has been dying for some time. Now we’re even more alike to China,” said 20-year-old student Calvin Fan said.