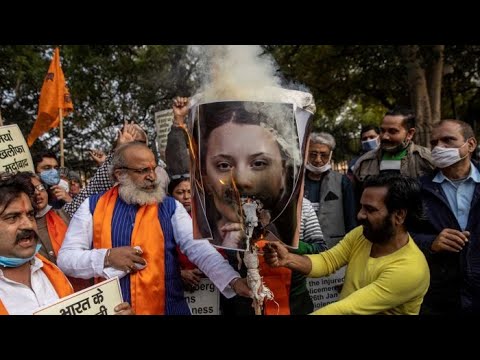 Protesters in India have burned posters of climate activist Greta Thunberg and singer Rihanna, after the two voiced support for protesting farmers in the country.

US pop star Rihanna, with a 101 million-strong Twitter following, was first to weigh in on the row over new agriculture laws farmers say would benefit private buyers at the expense of growers.

Hours later, Ms Thunberg tweeted her support to farmers, who have been protesting since late 2020 on the outskirts of Delhi.

The Swedish activist also posted a link to a widely shared document, which detailed how people across the world could amplify the movement.

Delhi police have since launched an investigation into the authors of the document stating it promoted unrest and hatred.

“We all should be outraged by India’s internet shutdowns and paramilitary violence against farmer protesters,” US lawyer and activist Meena Harris, a niece of Vice-President Kamala Harris, said on Twitter.

They burned posters of the celebrities in New Delhi while raising slogans calling their tweets interference by foreign powers.

One sign read: “India will not tolerate interference in internal affairs at the behest of separatists.”

“Foreign powers are conspiring to challenge the sovereignty and unity of my country,” protester Jai Bhagwan Goyal said.

“They are encouraging and funding farmers protests. They are trending the farmers protest and provoking the people of our country through social media. We have come here to protest against them.”

It came as tens of thousands of farmers camped on the outskirts of New Delhi for months demanding the withdrawal of laws they said would benefit private buyers at the expense of growers.

Farmers believe reforms, which would allow big retailers to buy directly from growers, could mean the end of long-standing guaranteed prices for their crops and leave them vulnerable to the whims of big business.

The Government says it wants to wind back decades-old, socialist-inspired policies and replace them with a market-driven economic model.

It has argued the reforms would give farmers the choice of what they sold, who they sold to, and for how much.

Earlier in the week, India’s Government told Twitter to comply with an order to block content alleging that Mr Modi’s administration was trying to wipe out the farmers who were protesting.

Twitter had blocked dozens of accounts in India after the country’s Home Affairs Ministry complained that users were posting content aimed at inciting violence, a government spokesperson had previously said.

Some of India’s most high-profile sportspeople and Bollywood actors and actresses also weighed in, coming to the Government’s defence.

The topics have re-ignited debates on social media between Modi supporters and anti-government protesters, which also sparked violent clashes at protests last year.