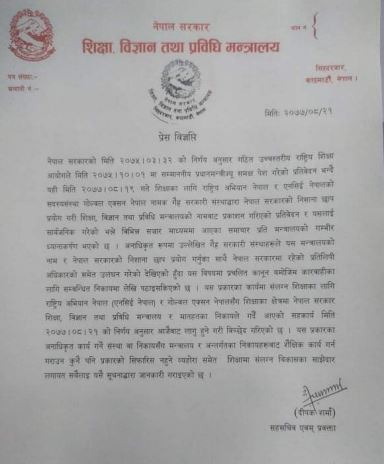 The Ministry of Education has recommended action against the members the High Level National Education Commission after they made public their report, which was kept secret by the government, on Friday.

Prime Minister KP Sharma Oli had kept the report secret for the past two years. However, Non-governmental Organizations published and distributed the report book on Friday after the decision and approval of the 13-member Commission.

The Commission was formed by the Council of Ministers under the chairmanship of Education Minister Giriraj Mani Pokhrel.

The Ministry of Education has announced severance of cooperation with the National Campaign for Education Nepal (NCE) and Global Action Nepal for publishing the report as books and has recommended the Ministry of Home Affairs to take action against the NGOs.

The Ministry has stated in a press release that action against the organizations was recommended as per the prevailing law as they had violated the copyright of the Government of Nepal and used the official insignia as well as stamp in the published report books.

The Council of Ministers had decided to form a commission under the chairmanship of Education Minister Giriraj Mani Pokhrel on July 16, 2008. The 25-member commission had reached the residence of Prime Minister KP Sharma Oli in Baluwatar on January 15, 2019 and submitted its report.

Though media outlets had unofficially released the report at that time, the government kept it under wraps.

Expressing dissatisfaction over the government’s keeping the report secret for two years, the Commission members prepared and distributed 500 books with the help of non-governmental organizations.

Members of the Commission argued that it would be ridiculous to talk about copyright issues while publishing and distributing the report which has already been made public by the media in 2019.

They added that the book was published after the government failed to reveal the report despite the requests to the Ministry of Education and the Office of the Prime Minister and Council of Ministers under the Right to Information Act.

WHAT’S IN THE REPORT?

The report has emphasized to bring private guthi and cooperative schools under the same legal purview by making private educational institutions service-oriented. It has also defined separate roles of federal, provincial and local governments in the education sector.

The report has suggested that at least 20 to 25 percent of the national annual budget should be allocated to the education sector. Currently, the government is allocating only about 10 percent of the budget.

It has also recommended to fix add posts to solve the shortage of teachers and advised that minimum qualification for aspiring teachers be increased to enter the service.

The report also emphasizes the need to provide free and compulsory education to all. It has been suggested that secondary education should be made compulsory till 2030 BS and no fee should be charged.

It states that the criteria for affiliation and regulation should be effective so as to make universities autonomous and free from party politics. Emphasis has been placed on increasing the opportunities for technical and vocational education and training.

“There should be general and technical streams Grade IX onwards so that the students can choose,” the report says.

The report also recommends the government to make a legal arrangements so that every person receiving salary from the government should send their children to public schools. It has been pointed out that separate act should be formulated for school, higher and technical education.

It also recommends to end the system of having the Prime Minister as the Vice-Chancellor of universities and make arrangements to run it from the Board of Trustees. It suggests that office bearers should be selected through open competition, teachers’ license should be renewed in every five years, and thematic teachers should be present in all schools within the next five years.