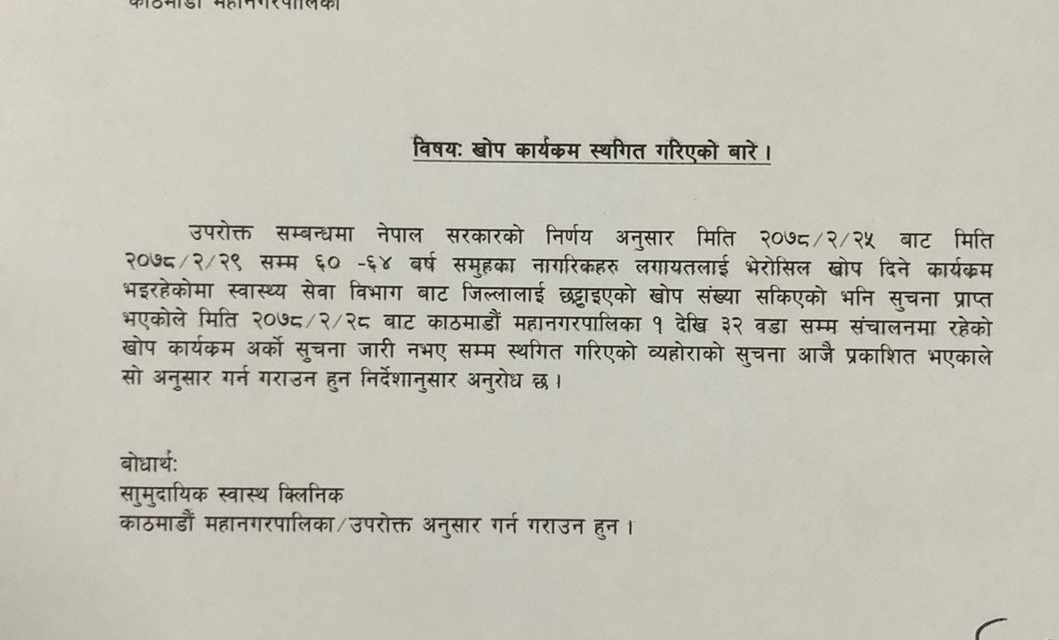 The government has halted the ongoing administration of the China-made Vero Cell vaccine in Kathmandu citing non-availability of enough jabs.

The government, with the coordination of the Kathmandu Metropolitan City (KMC), started administering Vero Cell vaccine to people between the ages of 60-64 years since Tuesday.

As per the schedule released by the government, the vaccination drive was supposed to continue for five days.

However, issuing a notice on Thursday, the Kathmandu Metropolitan City office said that the ongoing vaccination drive had to be halted Friday onward after it received a notice from the Health Service Department stating that the number of vaccines allocated for the district had run out.

With this, the vaccination program being operated in all 32 wards of the Metropolis has been halted.

Last week, China had provided one million doses of Vero Cell vaccine as grant assistance to the Government of Nepal. Following which, the government had launched its drive to vaccinate people between the age group of 60 and 64 years across the country.

Stating that the five-day drive aimed to administer the vaccine to over 100,000 people in five days, Kunwar had initially urged all KMC residents to get participate in the vaccination drive.

“We have been informed by the government that they cannot provide any additional vaccine to us. We have vaccinated around 28,000 people as of yet since Tuesday. We have no option but to stop the vaccination drive until further notice,” said Kunwar.