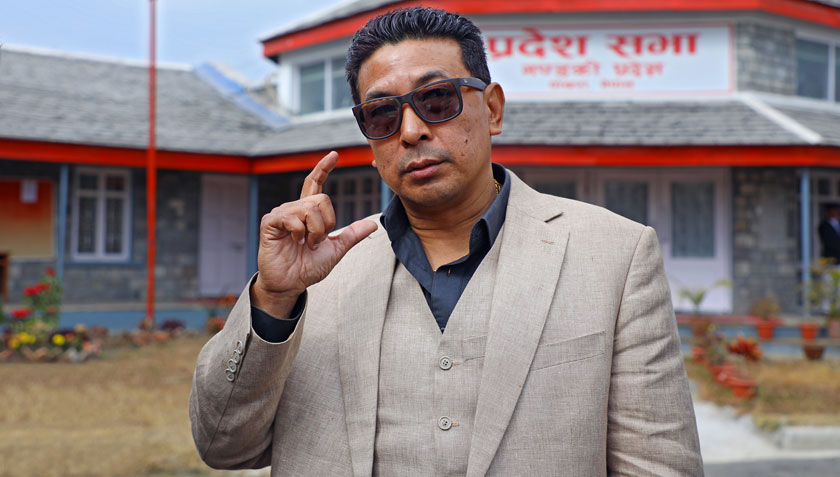 A gangster with several arrest records, Rajiv Gurung alias Deepak Manange has been sworn in as the Minster of Youth and Sports of Gandaki Province.

Gandaki Province Head Amik Sherchan, in the presence of Province Chief Minister Prithvi Subba Gurung, administered Manange the oath of office and secrecy on Thursday, promptly after he was appointed.

Manange, an independent member of parliament, was appointed to the ministerial position by Chief Minister Subba Gurung. Gurung, who was supported by the CPN-UML, had won from Manang (B) in the 2017 provincial elections.

Subba Gurung expanded his cabinet yesterday as faces a no-trust motion in the Gandaki Provincial Assembly.

The Ministry of Social Development was split into two to give Manange the ministerial position.

Shortly after winning the elections in Manang, the notorious gangster had joined the Nepal Communist Party.

In Nepal, those involved in hooliganism have long resorted to political maneuvering to escape legal action. Manange was earlier associated with the Rastriya Prajatantra Party (RPP) between 1990 and 2011.

However, as RPP became weaker, he started turning toward other parties. He had joined CPN-UML in 2017.

CPN-UML had decided to give him a MP ticket from Manang Province Assembly ‘B’ in 2017, but the party backed-out from the decision after widespread protests on social media and among public regarding Manange’s criminal background.

While Manange registered for the election as an independent candidate, CPN-UML did not place any candidate against him.

Despite winning the election, he was not allowed to take the MP’s oath of office and secrecy as he was serving jail time on attempt to murder charge.

Manange filed a petition in the State Assembly on December 30, 2018 demanding that he be administered the oath of office following his release from Nakhu Jail after serving six months.

He was sworn in as an independent lawmaker on 28 January, 2019 amid controversy.

His newly-found politician’s badge did not deter Manange from showcasing gangster behavior as a year after gaining his position as a lawmaker, he slapped Kaski Football Association president Milan Gurung during a heated discussion.

He had slapped Milan while he was preparing for the inauguration of the Chief Minister’s Cup football tournament in Bhandardhik, Pokhara on January. Police arrested him on January 23, 2020 for beating the football association president.

However, Manange claimed that graft was rampant in the sports field and that his attack on association’s president was not directed towards an individual but at the corrupt state of affairs.