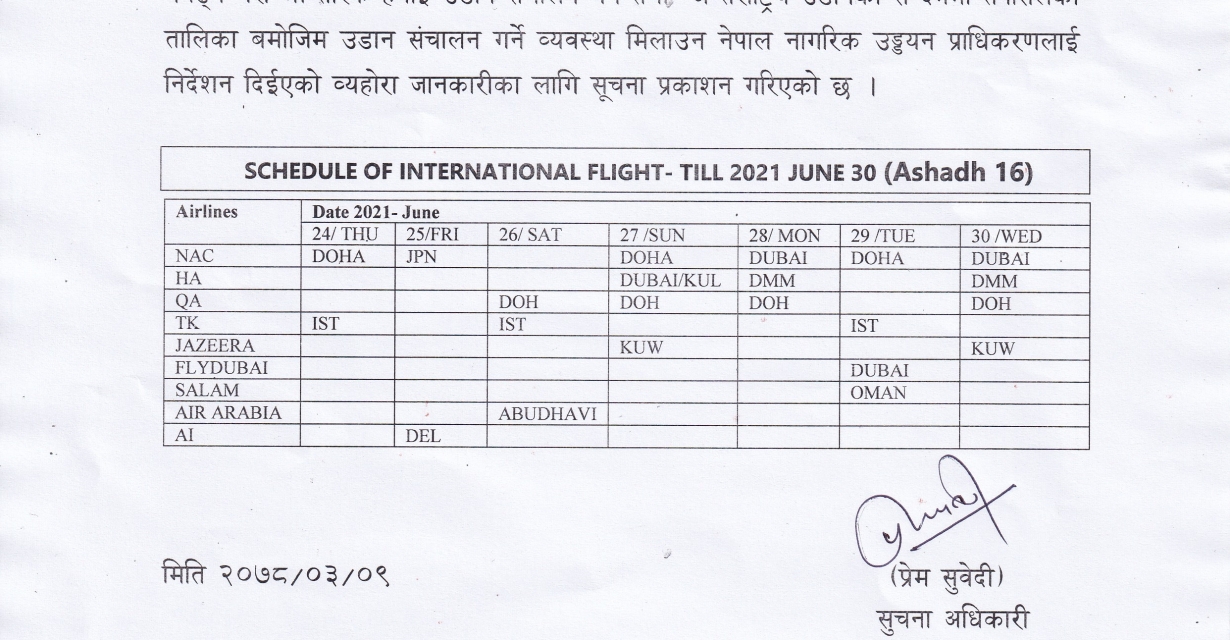 As the Council of Ministers decided to resume domestic and international flight services, the Ministry of Culture, Tourism and Civil Aviation (MoCTCA) has started to make necessary preparations towards the same.

According to the spokesperson of MoCTCA, Taranath Adhikari, regular domestic flights will be resumed from July 1 with only 50 percent seat occupancy whereas international flights will be operated as per the safety protocol developed earlier by the government.

The Civil Aviation Authority of Nepal (CAAN) will monitor the situation at the airport to ensure if the health safety protocols are being followed.

As per the Ministry, one week gap between ticket-opening and resumption of domestic flights will be maintained so as to provide time to airline staffers that reside out of the Kathmandu valley to return to their work stations as well as for passengers to book tickets.

Meanwhile, international flights have resumed from today on the specified destinations. The ministry has made public the flight schedule for up to June 30.

The government has decided to resume regular international flights to and from Kathmandu in limited destinations.

With the new decisions in place, Nepal Airlines and Qatar Airways will be allowed to operate two flights each a week in Kathmandu-Doha sector.

Among other sectors, the government has allowed to operate one flight each a week in Kathmandu-Muscat, Kathmandu- Seoul, Kathmandu-Japan, Kathmandu-Chhengdu and Kathmandu-Guangzhou sectors.

Domestic and international flights have remained suspended since the government enforced prohibitory orders shortly after the outbreak of the second wave of COVID-19 in April.