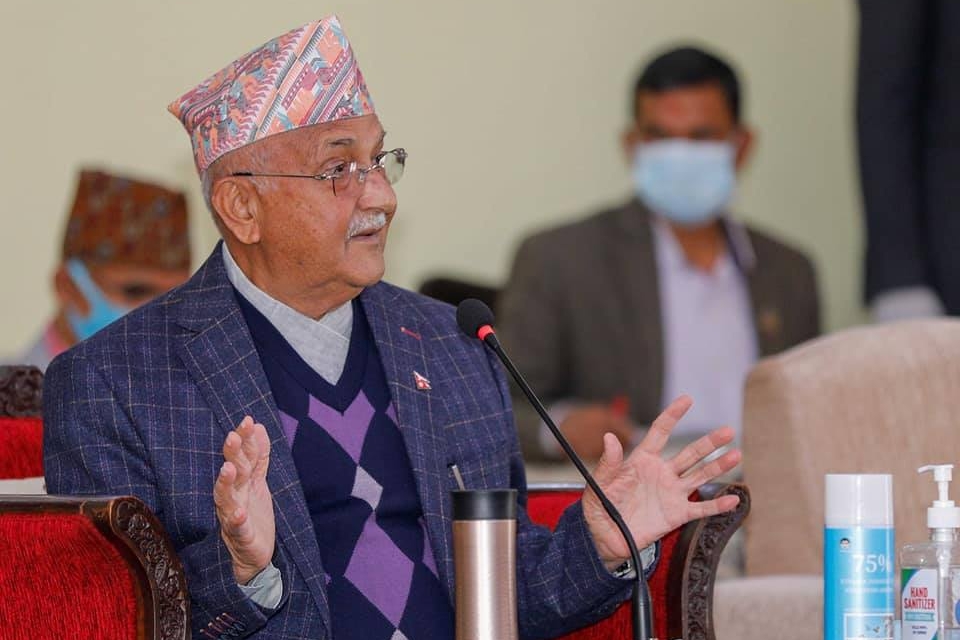 CPN-UML hands over more power to Oli as he threatens rivals to join him or face action
Read Time: 3 minutes

The KP Sharma Oli-led faction of CPN-UML has handed over additional powers to the party president and prime minister, Oli, at a time when the party’s rival faction has refused to comply stating that they were not involved in the unilateral decisions made by the party president.

Saturday’s Central Committee meeting of CPN-UML gave Oli the right to unilaterally change the closed list of proportional Members of Parliament (MPs) of the Central and Provincial assemblies.

According to sources, Prime Minister Oli will now work towards sustaining the incumbent government by using his right to manipulate the closed list of MPs.

For that, Oli plans to remove proportional MPs that are against him and appoint those close to him, and to attract directly elected MPs close to UML senior leader Madhav Kumar Nepal.

The decision made at the Central Committee meeting has further eased Oli’s strategy to win over the majority vote of the Janata Samajwadi Party and to run the government for the remaining two years.

The meeting also gave Oli the power to dismiss, nominate, and take action against members of the party’s central committee and subordinate committees, and to write to the Election Commission as well as other official bodies for action.

Now Oli can unilaterally, without taking the opinion of the party’s central committee, make decisions.

Oli, who was elected as the chairperson for the first time from the general convention held in 2014, had stopped paying attention to the party’s central committee as the Madhav Kumar Nepal faction held a majority in office bearers group, Standing Committee, Politburo and Central Committee.

After the merger between CPN-UML and CPN-Maoist Centre in May 17, 2018, Oli had been taking unilateral decisions with the coordination of Pushpa Kamal Dahal despite opposition from the leaders of the Nepal faction.

The verdict triggered NCP’s dismissal and reinstated CPN-UML and CPN-Maoist to their pre-merger state.

Controversy within CPN-UML escalated after Oli decided to dismiss the roles and responsibilities of leaders belonging to the Nepal-Khanal faction.

The Nepal-Khanal faction has been saying that the PM must revive the party committees that existed before the UML’s merger with the CPN-MC, and he should also rescind the March 12 decisions when he amended the party statute and inducted 23 Maoist leaders to the party’s Central Committee.

Gyawali added that while the party might tolerate the rival faction’s activities before March 7, when the merger between the UML and CPN- MC was nullified by the Supreme Court, it could no longer do so post-March 7.