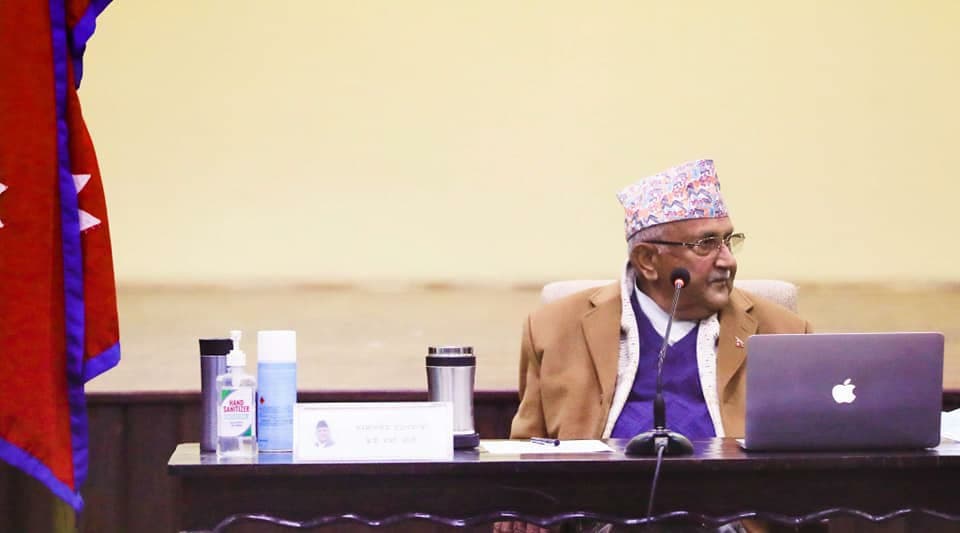 A contempt of court case has been registered against Prime Minister KP Sharma Oli at the Supreme Court.

The case was filed against Oli yesterday for insulting the court and and for trying to influence the issues that are currently under discussion at the Supreme Court.

The petition filed by senior advocate Kumar Sharma Acharya on Sunday and another advocate Kanchan Kumar Neupane on Monday was registered at the apex court on Tuesday.

The petition alleges that Prime Minister Oli’s remarks during a gathering of party workers at the Karki Banquet on Friday (January 22) sought to influence the issues that are currently under discussion at the court.

Prime Minister Oli on Friday had taunted at a senior lawyer, who is debating the issue of dissolution of the House of Representatives (HoR) currently under consideration at the Supreme Court, during his speech.

“Some lawyers have been repetitively saying that there is no prerogative in the constitution to dissolve the House of Representatives. They also took a grandfather (‘bajey’) lawyer to show their theatrics. I wonder why they are bothering the old man?” Oli had said in his speech.

Oli’s snide was aimed at Senior Advocate Krishna Prasad Bhandari. Bhandari is the senior most advocate of the country at 94 years’ age.

The petition filed against Oli states that the privileges given to legal practitioners by the constitution and the law should be respected by all, including the Prime Minister.

The petition seeks to take Prime Minister Oli to court for contempt proceedings.

If found guilty of contempt of court, Oli could the face one year imprisonment or a fine of Rs 10,000 or both.

Meanwhile, Advocate Raja Ram Ghimire has filed a contempt of court case against Senior Advocate and former speaker Daman Nath Dhungana for his recent remarks about HoR dissolution cases. The apex court has, however, not registered the case yet citing lack of fulfillment of court procedure.

Ghimire said Dhungana recently said if the Supreme Court failed to reinstate the HoR, it could fail the current constitution and people may unseat the justices.